Enabling the scholar as a self-realized entity rarely sees root without heuristic application. Notions of change and the natural assumption that an artist should ‘brand’ and solidify places the true artist in caged of role of an obsequious crowd-pleaser. Though change is more visible today as bands release their formative demos as albums with little self-conscious attitude towards plagiarist sounds and heavy resemblances, moderate changes over time have allowed Danish progressive heavy/sludge metal band Rising to find an organic approach to their own distinction. You can draw a dashed line from their self-titled 2009 EP to their latest full-length, ‘Sword and Scythe’, and still hear the bones of Mastodon and Baroness influenced sludge metal informing the approach but Rising does not appear so closely related. If anything their standards have followed leaders while their music has shaped into a mixture of progressive rock and sludge metal informed by modern epic heavy metal.

In hitting their stride with an average sound on ‘To Solemn Ash’ (2011) it seemed that Rising had trouble deciding what they would be next. Their second full-length, and last with original vocalist Henrik Hald, found the band toying with bothersome post-hardcore influenced ideas that likewise appeared to be headed in a High on Fire sort of direction on ‘Abominor’. A fine enough album by itself, it didn’t represent a paradigm shift nor any marked improvement over the previous album and it seemed the band was in flux until 2015 where they staffed a new vocalist and bassist. Fine artist and vocalist Morten Grønnegaard brought greater range and his own sense of melody to ‘Oceans Into Their Graves’ (2016) but most importantly it seems this new lead presence set Rising upon a more serious and inspired creative momentum since.

‘Sword and Scythe’ is a complete refinement of ‘Oceans Into Their Graves’ dependent upon admirable development of melodic ideas, doubly improved production fidelity, and ambitious progressive heavy metal structures explored. Even more melodic than previous, it seems Grønnegaard has stepped up in providing the charisma that his performances on the previous album occasionally lacked; As such Rising have gone from an introverted prog-sludge band to a more brave (and ultimately musical) unit. This comes with increased melodic vocal work that is effective but also too often harmonized and doesn’t necessarily make great use of Grønnegaard who stops far short of an epic heavy metal band like Argus and instead rests within the range of a band like Hark. Though it’ll seem like a stretch merely by suggestionI’d say Rising are more likely to develop a la The Ocean rather than Mastodon on this current trajectory.

The first half of ‘Sword and Scythe’ is easily the most effective and they’ve no doubt shoved all of their best material on those first six tracks. Shades of epic heavy metal, progressive sludge, and even a fair amount of post-hardcore influence make for a solid grip of modern metal sounds but the remaining six tracks feel redundant by comparison. “Sea of Irrelevance” almost appears intentionally repetitive and disinterested in connection with the listener while “Aeterna” reverts to a style a little bit too close to their idols and influences. So, while I do believe that Rising‘s latest album is one of the best releases from October this year, it is still definitely a flawed full listen. Though I can concede this I am still optimistic about this modern vision of prog-sludge resembling epic heavy metal and I think if they paid closer attention to the dynamic pacing of the full piece they’d be onto something even more brilliant and experiential. As such the second half is a small bummer and I can moderately recommend the album. For preview I suggest the duo of “Empirical”, for its memorable chorus and the smooth transition into the equally impressive “Hunger & Exile” for the album’s strongest representative moments. 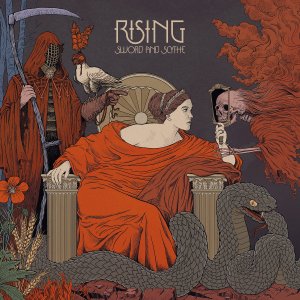