With the echoing crackle of a campfire snapping under a doomed acoustic guitar intro riff Melbourne, Australia death metal trio Faceless Burial signal the return of their intense brand of riff-based brutality in 2018. If you slept on their debut full-length ‘Grotesque Miscreation’ (2017) consider your complacency an easily absolved hindrance. Young but seeming veterans of the Melbourne adjacent grindcore and powerviolence circles it seems that the fellows that make up this band began to circle the wagons around the time activity in (post-Cut Sick! band) Internal Rot began to wind down for a longer hiatus. Faceless Burial do not dabble in any sort of -core, though, their style is comparable to a band like Abramelin; Intrepid brutality inspired by the New York old school death metal scene of the late 80’s/early 90’s is complimented by considerable talent for the twisted death/thrash riffing of that same era. None of that would be particularly notable if their music wasn’t entirely willed into form through inspired riffcraft and succinctly delivered song structures.

The crooked blasting and Suffocation-esque opening riffs of “Theriomorphic Meconium Aspiration” soon give way to Funebrarum styled flitting between Incantation‘s pinch harmonic punctuated crawls and a monstrously regal riff. However you might envision that sort of spectacle the result on ‘Multiversal Abbatoir’ begins to approach the untouchable spirit of classic Immolation without aping their actual sound. Every riff serves a purpose, be it building a groove or creating tension within technical runs or descending pulses. The next track “Piteous Sepulchre (of Amentia)” flips the script with a main riffs unquestionably influenced by Sepultura‘s ‘Arise’ but driven by the clever slap of ‘Necroticism: Descanting the Insalubrious’. As was the case with ‘Grotesque Miscreation’ the approach to riffing is relentless but always with the swaggering diabolical Finndeath groove shared by modern groups like Tomb Mold and to a lesser degree Galvanizer. At the very least it will appear as a brutal step beyond the sort of death metal you’d find in Scandinavian and North American demo tapes circa ’90-’92.

At just over 22 minutes ‘Multiversal Abbatoir’ is a serious and insistent listen that needles the listener with brutal grooves and increasing semi-technical prowess that flows together as one great piece with several highlights in each song. The sound is raw and gnarled compared to their full-length last year but with continuous listen it only adds to the savagery of the performances. “Theriomorphic Meconium Aspiration” is something new and exciting from this band and ended up being an ear worm thanks to a couple of repeatedly emphasized riffs. Likewise the groove that builds into the second half of “Fistulated Beyond Recognition” ended up being one of my favorite moments on the album. It is a fine release from a band who’ve consistently proven their worthiness with each new set of songs and I love this slightly tweaked approach towards NYDM. Highly recommended. 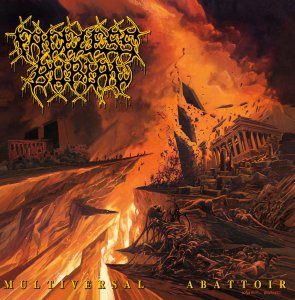