Arisen in quiet anonymity with the fungus-stained atmospheric skeletons of the early nineties informing their tonal gusts Oslo, Norway based Desolation Realm appear with no warning or representation in 2018. This self-titled debut demo is all the more inspiring as a random discovery, and cherished example, of atmospherically charged death metal beyond anything else the year has offered thus far. Though the guitars are planetary atmosphere themselves the layers provided are both distant as well as pure imposition and surgical attack. From the cacophonous Demilich and Timeghoul driven sauntering blasts to the terrifying war drums of Disembowelment spawn, the nature of Desolation Realm may appear as pure sonic obliteration but their narrative intent is not at all absent.

The first revelation is the incredibly rotten thump of drummer Ola, who channels the ferocity of Tony Holman (Timeghoul) along with the dry-rotted kick of pre-‘Odes of the Occult’ Execration. The second revelation is the death/doom thickened production devoid of the trappings of doom with transcendent atmospheric values on the level of Rippikoulu‘s ‘Musta Seremonia’ where the storm of blasts often leads to grooves on the level of groups like Krypts. Although I am excited to explain these characteristics with comparisons I cannot think of any band that has so capably connected those pieces together in terms of death/doom enormity with old school brutal death hammering outside of maybe Ohio’s long lost demo only band Doom Formation on ‘Definition of Evil’, and even then that was a totally different beast of reference. Here the riffs flow just as freely but with unnerving collaboration with the bounding, sinister drum performance. Guitarists Dag and Lian conjure inherently technical music draped in an oily layer of ectoplasmic rot, accursed soundscape and relentless storm achieved at once or in turns, and with bounding enthusiasm rather than pompous arrogance.

The blend of atmosphere and brutality lends itself to an otherworldly, esoteric… almost tribally achieved vibe that is entirely Desolation Realm‘s own; This reminds me of the first time I’d heard Mithras, who were similarly afflicted with a highly conceived atmospheric sound that eventually evolving into one of the more distinct and quality-controlled bands of an era. I see as much, or more, potential in what these Norwegians have cooked up in their caverns and their next steps will be highly anticipated. Atmospheric death metal with riffs and an incredible dynamic urgency? Of course this is highly recommended listening and honestly one of the best releases of the year in terms of death metal. For preview I’d normally recommend one or two tracks but I think the standout moments of the title track really call for the context of the tracks that surround it. As such, I recommend the full twenty minute listen. 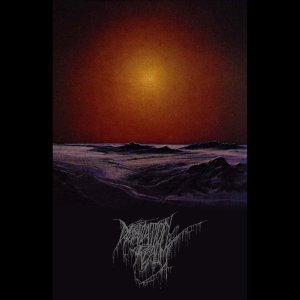