Ambition among those who are intensely collaborative versus those who go it alone can be accused of creating two separate class of populist art rising within the perceived heavy music ‘underground’. Whether they’ve risen through the merits of their craft or simply paid to play, a certain amount of lucky visibility still decides what reaches willing ears of influence. With organic discovery tending to overwhelm listeners with the need to cruise through new and old alike without meaning or connection, when does the original ambition of an artist play into the viability of their new and ‘next’ thing? In most cases those that keep track see deleterious returns as artists please ambitious labels taking reasonable cuts while endorsing new licensing. The clash here is entirely invented by the listener as the romance for an old sound clouds the human qualities of musicians, ignoring the songwriter’s self-pressurized need to improve and ‘progress’. Danish blackened heavy metal Slægt quartet represent musician Asrock‘s (Oskar J. Frederiksen) rise from incredibly detailed and distinct black metal roots, which once thrived within static-fueled distortion and claustrophobic gnashing, towards a polished and catchy melodic black/heavy metal band. With collaboration and professionalism comes some alienation from the earliest fanbase created; The question I muse over in analyzing their third album, ‘The Wheel’, is whether or not the results of this progression are ultimately worthwhile.

In listening to a song like “Udlængsel” from Slægt‘s debut full-length ‘Ildsvanger’ (2015) the seeds of Asrock‘s vision were entirely clear and much of the blowback that came beyond were for the love of the blown-speaker fidelity and sound design of that first record. ‘Ildsvanger’ was the peak of what Asrock was capable of alone whereas ‘Beautiful and Damned’ (2015) EP was the full live line-up put to tape and cleaned up to a late 90’s melodic black metal standard. The material was actually far more reminiscent of the sort of New Wave of Traditional Heavy Metal (essentially a general 80’s metal revival) than expected, with the bounding darkness of melodic black metal applied. In poaching members from two very promising Danish bands (Reverie, Kamp) Slægt was immediately impressive and would quickly sign with Ván Records. From this point it was clear they’d pursue the blackened heavy metal route in full and little has changed in that regard. So, what degree of unique voice separates Slægt from groups like Tribulation, In Solitude, or Cloak? A combination of shared traits with each.

Placing ‘Domus Mysterium’ (2017) near the middle of my ‘Best of the Year’ came from several months of regular listening thanks to a relative surprise discovery of the band later in the year through a random recommendation. With no knowledge or vested interest in the difference between ‘Ildsvanger’ and ‘Domus Mysterium’ it was simply one of the better black/heavy metal releases I’d heard in a while and I love the long and wandering guitar solos that characterized the full listen. It was very much evocative of what Morbus Chron were doing before they dissolved but from black metal’s speed metal informed perspective (see: “The Tower”). The only important point to be made in prefacing a look at ‘The Wheel’ is that I don’t see it coming from a bandwagon perspective, nor does their trajectory ultimately echo that of the Swedeath to Gothic Metal route of Tribulation, yet.

“Being Born (Is Going Blind)” and the follow-up of “Masican” act as almost identical pace in offering similar introductory structure as the opening moments of ‘Domus Mystertium’. The blackened heavy metal sound is emphasized above their extended rock guitar lead driven progressive-isms previous and oddly enough there is a relative bounciness, an uptempo feeling to the opener this time around with a groove akin to the more popular Old Man’s Child level of melodic black metal, minus the hokey melodies and keyboard work whereas “Masican” jogs into mid-paced semblance of speed metal territory dressed up in the drag of black metal. The Slægt that I’m interested in shows up beyond this point and even moreso than ‘Domus Mysterium’, this takes some time to develop within the record. There is a pointed focus on the sort of guitar work you’ll find on records like ‘The Formulas of Death’ that generally works well with their more modernized and blackened retro heavy metal treatment (see: “Citrinitas”) but I find myself missing a connection with the music this time around.

“V.W.A.” sounds like a slow motion cover of peak Dissection that really begins to shine as a highlight on the record as it fades into an atmospheric lounge state. Moments like this place Slægt up there with modern groups like Vreid and Taake in terms of toying with classic sounds in interesting and modern ways but it becomes an odd juxtaposition next to songs like “Gauntlet of Lovers” which sounds a bit like Deceased doing a classic Iron Maiden cover (er, black metal Enforcer?). ‘The Wheel’ is perhaps prone to higher art than a band like Tribulation are anymore, even if just by virtue of greater talent for interesting composition, but I see the fog of black metal beginning to lift with each record. Not a huge deal to lose their edgy side a bit more and become additionally evocative of traditional heavy metal but I need more than an impersonation of classic heavy metal and a focus on the songwriting that sustains that period of heavy music to stay interested.

While I did feel I was doing some due diligence in examining this band beyond ‘Domus Mysterium’ it seems that ‘The Wheel’ suggests a path I’m less interested in. As entertaining as their clean and sharp style of blackened heavy metal is, little draws me back in for closer listening beyond continued infatuation with Slægt‘s previous record. Granted, the two records aren’t drastically different but ‘The Wheel’ has just a bit less of what I’m looking for in terms of guitar work and sub-genre distinction beyond polish and pomp. Moderately recommended. For preview I am suggesting “V.M.A.” for melodic black metal fans and “Masican” for folks more in tune with heavy metal throwbacks. 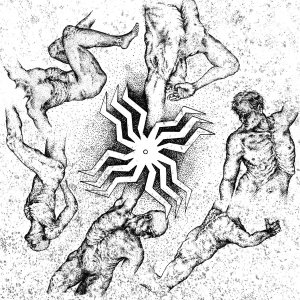