Although Jody Seabody & The Whirls is a name that’ll draw in the attention of garage psych and punk rock fanatics the Houston, Texas quartet are absolutely not a focus tested brand. In fact their discography feels almost entirely unrelated from release to release at face value. Their earliest official release the ‘Orange’ (2009) EP appears as a slight precursor to their Ape Machine-esque debut full-length ‘Summer Us’ (2012) which was a pound of marshmallow fluff compared to the Wipers-meets-Big Boys hardcorish bop of ‘Jody Seabody and the Whirls Sing Songs’ (2012) a collection of then previously unreleased recordings from 2005-2006. Point A to Point B made little sense to me without considering the ethos of the band itself. In fact it wasn’t until the final track from their second full-length ‘Holographic Slammer’ (2015), “Fucked Up Adventurous” that it was clear Jody Seabody & The Whirls make music for themselves and they’re not going to be happy stuck in any sort of stylistic rut. Eclecticism as their guiding light and in service to no one, the band follow the wavelength at the conclusion of their previous album and crank up the early 80’s hardcore punk within their garage psych sensibilities for a truly unexpected experience on ‘Hawksamillion’.

Making good on promoter’s description of ‘aggro-psychedelic doom punk’ the opening riffs and aggressive ‘Word as Law’ era Neurosis vocals (from Dave Merriett, I’m guessing) offer thrilling new ground for the band to cover. Sure, there were hints of these interests on those way back in the day ’05-’06 recordings but nothing as thrashcore/crossover inspired. The garage rock grooves are more early 80’s SST Records than anything else as “Ultra Defiant” kicks things off, reminding me of ‘Kill From the Heart’ era Dicks and the seamless corruption of the infamous Faith / Void split. It might not be ‘metal’ enough to convince your average retro crossover party thrasher to jump in but where ‘Hawksamillion’ shines is in adding aggression to their repertoire in a genuine manner. The album itself is a reflection of an age of misinformation, zealotry, and growing awareness of brutal violence worldwide but that isn’t to say this is a stark naked serious and ultra-politico experience. You can just -feel- the head to toe frustration and to be honest it is far more convincing than a lot of dedicated traditional thrash heads can pull off in 2018.

Don’t let me convince you that you’re getting a ‘pure’ anything, though. The old school hardcore punk meets buzzing Crumbsuckers crossover chunk doesn’t overpower the psychedelic fumes the band are known for. The eclectic nature of ‘Hawksamillion’ is such a shock to folks who missed out on the mid-to-late 80’s post-hardcore scene as funk revival, alt rock, glam, and post-punk remnants became massively awkward transitions for less capable hardcore punk kids as they stretched their wings too far in their twenties. I’m not saying that is where the record falls, but it makes good sense to bring up Bad Brains here, and the Washington D.C. area’s mind-expansion within that era; While many decided to just straight up go metal they found their own roundabout way of getting there, inventing a few sub-genres along the way. I might suggest some of the same paradigm-shifted timeless appeal can be applied to description of Jody Seabody & The Whirls‘ latest.

The thrill of a band shifting gears in a massive way only lasts so long. The eventual ‘taken as it is’ take on the rip of thrashing hardcore is that it drives ‘Hawksamillion’ into my favorite albums of the year list with the caveat that it is still a mildly flawed full listen. For all of the angular hardcore, punk rock sing alongs, and transitions into spaced-out 70’s grooves the mid-point presence of “Making Demons” isn’t bad, just weird. I couldn’t decide if it was supposed to be surreal comic relief or… well, I don’t know. It doesn’t at all kill the record’s momentum or really serve any purpose beyond separating two of the album’s strongest tracks “Grenade Green” and “All Gone White”; If you’re as obsessed with ‘Word as Law’ as I am the cut of their jib on those tracks, along with “Terror TV”, will be a huge sell for the spin.

‘Hawksamillion’ is undoubtedly one of my favorite releases of the year despite my incapable assessment of their garage punk influences. It speaks to the day-to-day mess inside my head with some empathy and some reasonable simpatico. Jody Seabody & The Whirls, this unassuming and impossible to nail down psych band somehow manage to sate the bloodlust I have for aggro music and guitar driven performance along the way. It gets weird but never goes too far off message and because I haven’t been able to put it down since August I can highly recommend it to folks who have some interest in hardcore, garage punk, and the prospect of aggro-psych/doom/crossover rock. For preview “Ultra Defiant” is mandatory as an introduction and “Grenade Green” will provide the bigger picture for the full listen. 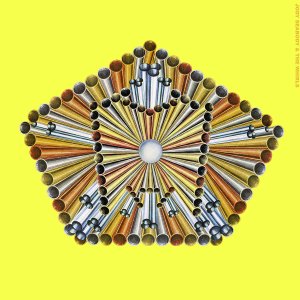