The curse of getting your hands on a promising new band’s demo tape comes with the expectations you might build around it for months or even years of anticipated realization of potential. Imagine the shock of hearing the professional development evident between Suffocation‘s thrashing ‘Reincremation’ demo and the infamous ‘Human Waste’ EP, likewise consider the defeat of hearing Interment‘s (Finland) demo from 1990 and having nothing materialize from its Finndeath croaked grooves outside of one renamed reissue a year later, the same could be said for even more substantial groups like Timeghoul or the ‘sure thing’ of now dissolved bands like Crematory (Sweden) and Stench of Decay. However tragically underrated and/or inspiring these groups might appear in hindsight they all contain positive traits that could be applied to the promising otherworldly blasts of Olympia, Washington death metal band Warp Chamber.

Moshable grooves shared between early New York and Finnish death metal early adopters like Suffocation, Incantation and Adramelech inform Warp Chamber in the same way that inspired generational equivalents in Timeghoul and Blood Incantation. An trailing almost dissonant progression builds upon the movement created between Terrance Hobbs and Mike Smith in the early 90’s but instead of focusing on the brutal slap of that material Warp Chamber use it as thrusters for angular sets of riffs that groove-and-grind as the Finnish death metal scene did beyond the worldwide stir created by ‘Symphonies of Sickness’. The pinch harmonics and mosh riffs may appear as gluey, transitional filler on “Harvesting The Life Force Of A Crumbling Orb” but in fact create a point of personality and memorability that is seemingly pulled right out of Tomb Mold‘s playbook.

The strength of this demo lies in arrangement for effect. In building towards the release of those jogging, propulsive moments (see: the first few minutes of the title track) with a Demented Ted-esque aggression the drop of the groove has a similarly energizing effect as the typical hardcore breakdown was originally meant to supply. In providing classic North American death metal tricks, such as abrupt tempo changes and chaotic, thrashing rhythms Warp Chamber show a pretty impressive hand on their first outing. Whether or not they keep up this ‘NY pit metal meets Scandi coffin spew’ clip going the potential for bounding, forceful, and exciting death metal is absolutely worth running with. I’d normally recommend one track for preview but you need to hear both because the 9+ minute second track is an album seller by itself. Highly recommended. 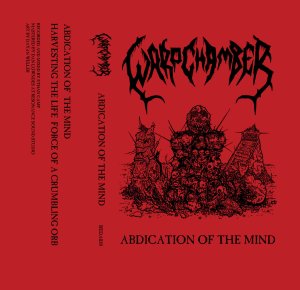