With time the disintegrating and self-shaming hulk of Göteborg’s brief melodic death metal superiority mutates into parody and misconstrued influence. Exhausted of meaningful ideas and ready for new venues of expression, the creative proverbial ‘restless leg syndrome’ of many Swedish melodic death metal artists in the late 90’s begat many a passé cash-in and insincere follow-up. The sub-genre soon became embarrassingly uncool and a threat to the perceived credibility not long after the rest of the world began to create rote imitations of the style. Yet it isn’t self-conscious attitudes or a load of dead ideas that will shock a Swede into dumping a project but, rather boredom. In looking back at the dead with clear hindsight a few gems exist among the youthful pretenders and passing fanciers. Sacrilege escaped that fate with nigh perfect placement as their frustratingly epic, above-average skill level was poached and decapitated to enhance the pop-metal ambitions of In Flames.

Formed in 1993 and among the middle-tier legends of Black Sun Records after their polished ‘To Where Light Can’t Reach’ (1995) demo turned many heads, Sacrilege represent ‘just enough’ of a band at just the right time. For decades there has been little noted about this band beyond small groups of people quickly realizing that drummer/vocalist Daniel Svensson was likely a wasted gift among the terrifyingly poor taste of post-‘Whoracle’ In Flames. When afforded the luxury of a ‘What if…’ the mind clearly devalues the initial reasoning. ‘Lost in the Beauty You Slay’ and ‘The Fifth Season’ represent a high quality representation of a post-‘Slaughter of the Soul’ Gothenburg with the additional representation of the concurrent rise and peak of the No Fashion / ‘Storm of the Light’s Bane’ style of melodic black metal.

The lushly tonal and surreal paintings, the Lovecraft and Poe influenced lyrics from the decent suburban education system in Sweden, and the something borrowed/something new approach of nearly every band within the city limits made for a suddenly serious business for the world over and represented an opportunity for many aspirational young musicians. This competitive and refined level of artistry required a sense beyond talent, the secrets of the trade were well shared and the students often more than apt in observing and recreating methodology. Not only was melodic death metal easily clone from a point of music theory and stylistic emulation but the thriving factory at Fredrik Nordström‘s famous Studio Fredman could quickly and efficiently engineer the sound of the times up to par with their more recent bestsellers. No one would blame you for skimming through this album and labeling it ‘badass but generic’ then moving on.

Decades later hindsight might be nipping at your ass when nostalgia strikes and you realize that ‘Lost in the Beauty You Slay’ may be understated and average for the time it dropped but there were few melodic death metal bands that managed this level of melodic refinement, balanced guitar tone, and production value that actually holds up beyond ninety percent of their peers. You have the fluid movements of early Dark Tranquillity, the blackened rhythmic swooning of A Canorous Quintet, the heavy metal pomp of pre-‘Slaughter of the Soul’ At the Gates, and just a small clip of the Sacramentum and Dissection melodeath fueled style of black metal. The album feels cumulative and ‘underground’ in escaping most of the NWOBHM imitation lead guitars found on In Flames side of the fence. Ablaze My Sorrow, A Mind Confused, Eucharist and several others come very close to this sort of reasonable balancing act but each would crumble into shit-wank on their second release or have massive production issues along the way; Sacrilege appeared polished, rehearsed, arranged and professional on all recordings and this helps a great deal in valuation of their brief legacy.

Where the band arguably lacked was in greater songwriting variation and novel ideas within the safety of the clearly established Swedish melodic death metal approach. There is no pioneering gravitas or magical inspiration behind ‘Lost in the Beauty You Slay’, though I would at least make the argument that a cumulative and style refining release that holds up well still makes for an important introductory item. There is immediate gratification within both of Sacrilege‘s full-lengths in terms of hitting upon the best, most valuable aspects of Gothenburg melodic death metal that is at least sincere, memorable and heavy. Any collection limited to pioneers and not exemplar releases would inevitably become dry anyhow.

While it is surely a shame that the band dissolved as Svensson left for In Flames the transition from this record to ‘The Fifth Season’ should be enough to sate the listener. As a duo the two records speak to ambition, refinement and dynamic balance that is era defining but again, just slightly above-average. A reformation would happen a decade later with some extremely impressive demo tracks surfacing on MySpace (and later YouTube, search: Sacrilege GBG) with the promise of a record in a ’07-’08 time frame. This was not to be and it seems the inspiration was not there either way, Svensson retired from music in 2015 after a few more terrible, worthless In Flames records and although the tease of a reunion was cruel for the fans they’d unknowingly accrued over the decades since release… The two records his project left behind are museum quality all the same. 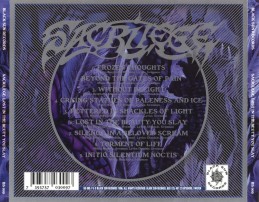