Never one to take a breath without writing a riff the restless hands of Avenger (Nocturnal, Front Beast, ex-Bestial Desecration) met with the equally prolific iron throat of vocalist Gerrit Metz (Dawn of Winter, Sacred Steel, Battleroar) in 2004. What came of this union would soon include original Nocturnal drummer Hellbastard as Angel of Damnation made a strong showing of riff and classic ‘epic’ doom metal sound with a self-titled debut 7″ EP that same year. Like many of Avenger‘s projects, the music cooks until it is done and when it does appear the material is choice quality. As such, it would be seven years until ‘Carnal Philosophy’ (2011) would appear during a boon of doom as the 2010’s began. With a sound less influenced by Black Sabbath and Candlemass the debut full-length from Angel of Damnation instead took a deeper look at the NWOBHM influenced rhythms of bands like The Lamp of Thoth, Hour of 13, and Metz‘ vocals were gloriously tuned towards those of Scott Reagers (Saint Vitus) for a skeleton stomping occult doom record that was hard to forget.

Beyond 2011 Avenger participated in nearly twenty releases between his various bands and even managed a hotly anticipated Nocturnal album along the way; Metz sang on seven of his own including two from the resurrection of Battleroar. That isn’t to say that Angel of Damnation were not active for the next seven years, though. In 2013 they included the duo of Forcas and Skullsplitter who also serve together as the rhythm section for black metal band Halphas and doom clan Cross Vault. Not only does this allow for ease of touring, as Skullsplitter also plays in Avenger‘s deathgrind project Terrorazor as well as Nocturnal, but introduces a more polished and ‘epic’ feeling into the band’s second full-length ‘Heathen Witchcraft’. Though you will immediately think of European ‘epic’ doom metal style as the album plays, the genius of it’s full listen is the incorporation of early 80’s US doom influences along with a bright and ‘live’ feeling production that brings the fidelity of the recording up to modern standards without sounding phony.

It is difficult to escape the comparison to Dawn of Winter‘s decade old ‘The Peaceful Dead’ in terms of general style and sound, at least upon first impressions. You’ll quickly realize that not only has Metz used a different affect and broader tonal range on ‘Heathen Witchcraft’ than he does in his other doom project but Avenger‘s songwriting is perhaps far closer to Candlemass‘ ‘Ancient Dreams’. Frequent wafts into the comparable high-dramatics of Wheel‘s underrated ‘Icarus’ and a the occasional Pentagram-esque vibe (see: “Dragged to the Torture Wheel”) both help to push through and enhance the slower, entrancing moments on offer. It reaches beyond the limits of ‘Carnal Philosophy’ in terms of variety and a professional but ‘classic’ sound yet you’ll still recognize this refinement as Angel of Damnation‘s original vision thanks to a handful of tracks that showcase some connection to their first record (see: “Lord of the Seven Churches”, “Tear Off the Veil of the Sun”).

Whether or not it was intentional there is an even balancing act achieved between foreboding riff and vocal melody within the span of ‘Heathen Witchcraft’ where Metz‘ creates compelling narrative that contributes equally to the strong, guitar-driven personality of the record. The title track is a fantastic example of this as soaring chorus and cryptic verses are paced to follow behind growling, tension-building riffs; It should be no surprise that this track most clearly invokes the crawl of traditional epic doom metal a la Messiah era Candlemass and it is a beautiful doom to behold. There are plenty of smaller surprises and very class details amidst the arrangements of ‘Heathen Witchcraft’ and while most of them appear as credit to the guitar performances and songwriting of Avenger the broader lasting musical statement of Angel of Damnation impresses with Metz‘ vocal performances. I’ve given this a high recommendation  and a mention in my best of October this year because it offers greater definition for the musical personality of this epic doom metal project and absolutely shifts their status from average side-project to a very noteworthy project. For preview the first two tracks “Brimstone Sorcery” and “Dragged to the Torture Wheel” offer the best possible first impression and the rest will feel like a natural, related progression. 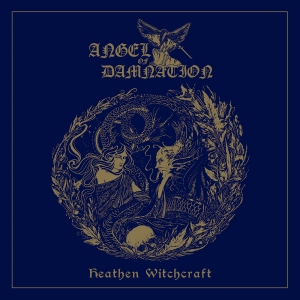