Crushed beneath the swamp humidity and deafened by the hiss of cicadas in the summer heat, the ringing chimes of cricket violinists silence nearby as you struggle through the mud towards the stench. Whether it is rotten, pickled with formaldehyde, freshly slashed, or burning… All human flesh reeks. The mind goes into mild shock as mortality is on full display, starting with noxious gases pouring from a freshly ripped-open wet plastic coffin. The body belches its rot and the skull’s browning bones shine through the worm filled meat. This would be a good time for sphagnum moss-preserved New York death metal duo Bog Body to chime in with their sludge-choked and distorted bass-driven sound. Their hollow thumping horror from beyond churns from the feet to the bowels; It comes as a shock from beneath, a sinkhole of anxious and shuddering tribal rhythm.

The sinking dread of witnessing death and human decay thwarted by natural mummification is perfectly captured by way of minimalist rhythm, heavily distorted bass guitar groove, and roaring death/sludge metal vocal snarling on Bog Body‘s debut demo ‘Through the Burial Bog’. They lead the way with crushed lungs and muffled screams beneath a layer of carcinogenic dust. It resembles the heaviest and deepest horrors of bands like Derketa or the downtuned hammer of Rippikoulu circa 1993 upon first impression but there is far more of a wandering groove flailing about in Bog Body’s collective mind. Atmosphere curls up and floats like the embers of burnt scriptures in a campfire. A jogging cyclic rhythm courses through the demo, a wretched sense of defeat and ruin that expresses with the sourness of snarling sludge.

None of this is solely the product of death/doom influenced savagery. Bog Body are calloused and worn wraiths, scowling and injured spectral beings, rotten spirits tormented and haunting where they were drowned and their approach comes from appreciation of bands like Barathrum (the atmosphere of ‘Eerie’ surely creeps in) and the busted wretching of Ride For Revenge. While “Guts of Infinity” ultimately resorts to death/doom metal the bulk of the album reminds me of Necromantia‘s ‘The Black Arts’ if performed with an early Oranssi Pazuzu sense of atmosphere. That throbbing love of noise terrorist black metal atmosphere and grotesque experimental fidelity informs the overall death/doom appearance quite a bit and I think this ‘bass and drums only’ approach will appeal to fans of death, sludge, doom and esoteric black/doom metal alike.

The atmosphere created by the drum recording and grinding bass tone is entirely successful but the vocal performances are what sets ‘Through the Burial Bog’ a notch above expectations. Hissing rasps over sludge grooves dominate the performances but death metal growls and grunts add to the immensity of the demo’s sound. The previously mentioned “Guts of Infinity” has a sort of Fudge Tunnel style to its opening section that gives way to bursts of death metal growls that helped the song stand out in my mind a bit. They haven’t exactly hit upon a Disembowelment level of avant-heaviness but Bog Body certainly have the potential to blast and doom up to that point. 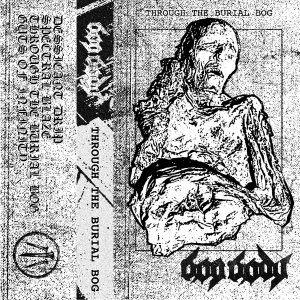