Scowling, kidney-punching Swedish doom rings raw in your blood gushing ears as Alastor‘s haze-coughed and staggering psychedelic doom drawl uses riffs as pilots swerving atop the mountainous sulking of Sabbath‘s eternal glow along with the United Kingdom’s ‘tragedians of today’ Electric Wizard style loftiness. This comes without camp but with the stench of soured rock ‘n roll cheese merely hinting at the great deluge of Finnish doom hounds of the early 2000’s. The occultism, or ironic nihilistic jerk of it all, will be grated just enough to please the Ice Dragon-auts and groaning zombies left in the wake of Magic Circles but all will be familiar regardless. Movement is riffed molasses that would flood and drown the senses in a bath of garage shaking guitar driven doom metal; The quaking chest-thump of extreme fuzz and watery, wailing vocals coalesce into deliberate ooze-paced conjuration. The buzzing, building rock peaks with bluesy lead guitars soloing atop subtle jets of driving stoner rock keyboard and I don’t know what came over me the first time I listened to ‘Slave to the Grave’. It gripped me like the swirling black hand of my dreams and suffocated me in mud and melted snow.

Something magnetic and profoundly theatrical guides us through these tales of terror, rebellion and sexually charged ritual. Brutal lyrics delivered with a cannabinoid zombified echo send forth cryptic doomsaying unto catchy moments worthy of Swedish retro hard rock and doom metal greats alike. Scandinavian through veiled Swedish accent alone, Alastor‘s debut full-length delivers its rotten box of horrors with a modern day doom metal sledge and the heavy psychedelic rhythms that the 70’s could not keep to themselves. ‘Slave to the Grave’ is a stadium sized bar band hulk extending a great foreboding wave of doomed stoner metal nausea toward unsuspecting doom hounds who can expect transfixion and torpor alike in the presence of such glory as “Your Lives are Worthless”; This track is nothing less than the next “Doom Over the World” for me at nearly ten minutes of captivity amidst a sermon mocking your very own existence. They’ve been up to no good for just a couple of years and this? This is too much.

‘Black Magic’ (2017) was just the start, an introductory EP where the song lengths were all extended and the sound was closer to ‘Soma’-era Windhand than anything else. The glorious fuzz-fidelity boost of ‘Blood on Satan’s Claw’ (2017) made clearer the hefty  post-‘We Live!’ era Electric Wizard influence but even still these are fairly aesthetic comparisons based on vocal effect and guitar tone. The grooves on display are far deeper than compatriots like Salem’s Pot and not yet dark enough to mention early Reverend Bizarre but these aren’t the worst references in getting the point. Doom is the focus and the philosophy employed doesn’t stray far at first by the time the stoner metal apropos rocking groove of “N.W 588” chimes in you get a hint of the versatility of this project but the 7+ minute acoustic jam of “Gone” pushes their capable horizons a mile further than expected.

The opus that is “Spider of My Love” reveals itself at the end of the spin and its nearly 18 minute bulk is showcase for what Alastor are capable of without limitations. At their most extreme the Swede quartet build a beautiful climb upwards that inserts wailing solos and keyboard jamming. Though it isn’t as far as I think they -could- go with their sound it is a fitting way to end a record that breaches the value of its own influences to great effect. It never felt like a truly out-of-left-field revelation as the foundation of those influences remains but no doubt ‘Slave to the Grave’ is something far more polished, adventurous and tasteful than most of its ilk. It’d all work without the ‘coming into their own’ moments throughout, and it is a very long record at nearly a full hour, but chopped up into pieces or enjoyed in full there is no denying the stoner/doom metal appeal inherent to the Alastor experience. Whether they’ll challenge themselves further in the future or rest on these admirable laurels it’ll be worth listening to.

The first time I heard ‘Slave to the Grave’ I was in line to board an airplane and I consider this a somewhat confounding variable. A mildly abnormal ritual alongside new music. I was floored and rubberized by the stalking grooves of “Your Lives are Worthless” and the the Lord Vicar-esque head-clubbing riffs of “Drawn to the Abyss” and fully airborne by the time “N.W 588” had fired off. It left an impression I haven’t been able to shake for weeks afterwards but I was altogether more impressed that it was a well-rounded heavy psych-tinged doom metal album beyond those grand first impressions. Highly recommended for how much it shakes things up beyond heavy, stoney doom metal songwriting. For preview you need to start with the epic “Your Lives are Worthless” and the catchiness of “N.W 588”. 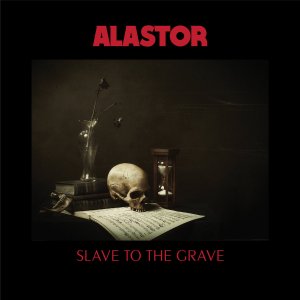