Categorically smothered in a post-Sabbath groove and a sound directly aimed at the occult ‘proto-metal’ era of heavy psychedelic rock music Baltimore, Maryland act Alms‘ debut serves as offering to the darkest of heavy rock the 1970’s had to offer. Without any intention of recreating the woodsy analog thump-‘n-buzz of the olden days, ‘Act One’ is a vibrant take on the connections one could make between bands like Jess and the Ancient Ones and ‘Machine Head’-era Deep Purple or early Lucifer’s Friend (minus the Zeppelin skew). They avoid the ‘retro’ tag off the bat due to a bright and earthen mix and a doomed occult rock style that builds upon the lurching brood of 80’s Pentagram and psychedelic darkness of Occultation. Alms’ talent for catchy hard rock songwriting ultimately makes for a compelling debut aimed at fans of ancient pre-doom metal spiritus and the heaviest modernizations of heavy psych grooves.

Formed as The Offering back in 2016 Alms consists of the bulk of Baltimore drone/death doom metal band Oak‘s lineup and key members of pre-Nux Vomica band Wake Up on Fire. The conception of Alms has next to no relation to their previous or ongoing projects and will feel worlds apart from the Khanate styled extended drone/doom of Oak. A stoner metal appropriate level of guitar fuzz and riff is constantly accompanied by the organ-jammed keyboards of Jess Kamen, who provides dual vocals alongside guitarist Bob Sweeny (Inure, ex-Moonshine). The sound of an overdriven organist is one of my favorite tones by proxy of nostalgia and thankfully it is often a lead instrument invoking a blues-less amount of ‘Fireball’ and ‘Machine Head’ influence to great effect.

Vocals from Kamen additionally create a Jess and the Ancient Ones reminiscence circa their ‘Astral Sabbat’ EP thanks to a shared keyboard focus but Alms stands out from that crowd thanks to osmosis of the golden 70’s spirit of Pagan Altar (see: ‘Lords of Hypocrisy’) influencing the guitar work throughout. So, it should be clear that the sound of this record is rendered quite well but the main event isn’t so much the tone and timbre of ‘Act One’ but rather the memorable songwriting that makes Alms a name worth dropping. “The Toll” begins with a kick and a crawl of doom but soon gives way a a rousing stoner metal sing-along with a pretty effective hook. From there the formula develops between the bluesy jut of “For Shame” and the Occultation-esque “The Offering”. You’re not getting huge riffs so much as clever ones that often circle back tightly and resemble the loose-rocking feeling of mid-70’s heavy psych.

Alms hit a lot of great notes and manage a couple of highly memorable jams on ‘Act One’ but it functions as a sort of proof-of-concept debut album that isn’t ready to venture outside of the box. They’re hitting upon a sweet pocket of doom and heavy psych and not rocking the boat otherwise; In this sense it won’t surprise fans of proto-doom and heavy psych persuasion  but it will delight. At 35 minutes I found the album to be an easy listen that offered a good balance of doom and stoner metal with a heavy dose of modern occult heavy psych driving the experience. The mix of old influence and new style makes for a solid spin that leaves a reasonable impression thanks to a handful of catchy songs. It won’t stick with me as a classic or a major standout for 2018 but as a debut it is impressive in terms of standing out amongst similar groups that lack the sort of personality that Alms manages to convey. Moderately recommended for fans of doom-leaning heavy psych. For preview “The Toll” and “The Offering” will draw you in the fastest but the opener “Dead Water” is my personal highlight. 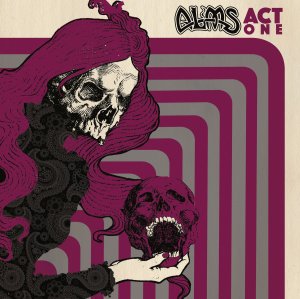