Just in time for the legalization of cannabis across Québec comes the second album from retro death metal hammer fiends Outre-Tombe. Arrivé en 2010 in union between members of Phosphorus, Kaotik, and Saccage these guys were punching out a hearty and primal form of old school death metal on their post-‘Leprosy’ explosion influenced demo in 2012. By 2015 they’d managed a full-length ‘Répurgation’ (2015) that more or less captured the era of groups like Morgoth, Pestilence and Benediction with a heavy hand still pulling from pre-‘Human’ Death records. That debut was sharp enough and represented a level of talent and tasteful ‘retro’ death metal about on the level of early Skeletal Remains. On their second album Outre-Tombe appear no less in a state of death metal barbarism yet ‘Nécrovortex’ represents an even more meticulously crafted statement that captures the otherworldly thrust of ‘Clandestine’ while embellishing the formula established previous.

By the time you’re about “Aberration” deep you should have had a few names snap into view: Benediction (not Bolt Thrower, your riff-memory is flawed!), Asphyx, Autopsy (‘Mental Funeral’), and the oft-snubbed duo of pre-’94 Unleashed and Grave. In my mind this combination of styles is more-or-less the building blocks for groups like Gorefest and Mercyless, so Outre-Tombe are still in great company with their style though you will feel the influence of early Swedish death metal as much as the Death influenced Dutch/American lineage. To say that it was all a blur to me for the first couple of listens is only reflective of the decades I’ve spent listening to the bands I’ve mentioned. In particular I am a rabid fan of early Pestilence and Asphyx so I hear those influences most loud-and-clear while potentially overlooking some of Outre-Tombe‘s own style and nuance.

The good news is that all of these nasty name drops should make it clear how entrenched in late 80’s/early 90’s death metal Outre-Tombe‘s work is. With this high taste level still in tact and even more adventurous and capable than previous ‘Nécrovortex’ is far more of a riff-machine than expected. The obvious influences to sound and style might pull you in with familiar tones but the guitar work of Cobra and new second fiddle Désastre (Survival Instinct) feels even more capable and the ripping thrash/speed metal influences shown in their side-projects begins to inform the increasingly complex movements and rhythms of Outre-Tombe. It is focused and ambitious enough to truly invoke ‘old school death metal’ which was admittedly less dynamic and more muscularly delivered than modern ‘new old school’ death metal that dominates the era of today. The only dings I’d give the album in terms of guitar work involve the lack of imaginative or interesting guitar leads, which are typical wild scrawls most of the time. A very heavy reliance on the ‘bones’ of Unleashed and Asphyx riffs for inspiration could be a detractor for some but I found myself well entertained.

Sure it has riffs, a cool-ass sound, and a wicked album cover so am I fully on board? Eh, the 90’s death metal kid in me says yep but I had to really pay attention to find the redeeming core of ‘Nécrovortex’. They’ve created a wild and densely structured bludgeoning but only a couple of songs stuck with me with some time away from the salad of it all. “Hécatombe II” is probably the first big banger on the album with a main riff straight off of an early Pale Divine album, “Rongé Par Les Miasmes” (and “Désintégration” while you’re at it) should justify all of the allusions to ‘The Rack’ and ‘Consuming Impulse’ made. I would largely recommend those tracks for preview with the first ‘single’, and ripping album closer “L’Enfer Des Tranchées” being an equally apt choice. I can recommend this album highly but only for folks still thrilled by the idea of ‘throwback’ early 90’s death metal that does not care to distinguish its sound from the past. In the sea of pompous and over-thought technical/progressive death metal that surrounds their native Québec Outre-Tombe are a gloriously primitive outlier by comparison though they offer worthy depth if given some consideration. 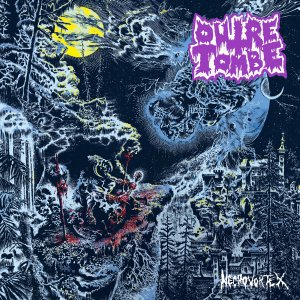