Here I present a ten album sampler of some stoner metal and/or retro hard rock I’ve so far overlooked this year. Consider it a soundtrack to your weekend spent with a funny grin on your face while you halfway finish unimportant yard work in between smoking weed in your bamboo-filled side yard and texting people like me, who don’t give a shit. Most of these albums made it here to Ten From the Tomb because I couldn’t manage the time for a long-form review or because I really didn’t have more than a paragraph or two worth of insight beyond banal description. If you don’t like stoner/sludge metal or retro hard rock, relax! This’ll be back every seven days with 10 more albums from different styles, genres, themes, etc.

Hey! Don’t dive in thinking this will all be shit. I always have some quality control in mind and looked for expressive, meaningful releases that hold value without gimmickry or bland plagiarism. This week’s (admittedly low-fuel) inspiration came from listening to Wheel in the Sky and Superfjord this past Monday and feeling like I needed to give stoner metal/retro rock a bit more love. Think my opinions are trash and that I suck? Want to totally tell me off, bro? Click away and let’s all live more sensible lives full of meaningful interactions. I’m too old and bored with people to care.

Oviedo, Spain based stoner rock trip Green Desert Water had been silent for roughly six years since their self-titled EP back in 2012 and they return with bloated sky-high grooves and thicker sound compared to the stripped down bluesy rock of the past. Somewhere between the illustrious bent of Leaf Hound and the stomp of Mountain by way of later Fu Manchu, Green Desert Water are a bit of old and borrowed mixed with something just contemporary enough to avoid sounding pure retro. It all hits like a ‘live in studio’ recording and keeps the overdubs and production fairly minimal. If you’re a desert rock and stoner metal guy 24/7 none of this will surprise, but I really enjoyed the bluesy doomed feeling of a few tracks. 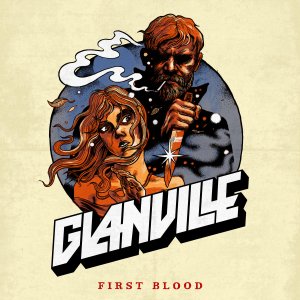 Going through this list I’m gonna end up typing Thin Lizzy at least ten times so let the first few come from a place of love in talking about Glanville, a NWOBHM and classic hard rock influenced outfit with members from UK and Germany. If you flip out for bands like Haunt, Gypsyhawk and Hypnos you’ll be equally inspired by the hooks and dual lead guitars of Glanville‘s debut EP ‘First Blood’. Like Hypnos the style here is ambiguously crafted with late 70’s heavy rock and early 80’s popular heavy metal in mind. I’m talking less “Cum on Feel the Noize” and more accessible Thin Lizzy, Judas Priest, and even a bit of Queen in there too. They’re equally interested showing a traditional heavy metal side though I don’t think they get much heavier than stuff like Demon‘s ‘Night of the Demon’. Catchy stuff and well done but the EP loses a bit of steam with “Durga the Great”.

This all-female melodic 80’s styled soft rock group from Madrid, Spain began as a compelling heavy metal group in 2010 and their ambitions have gone a bit softer and a lot catchier on this second full-length. I’m just at the right age where this type of music was on the radio when I was a little kid… and it fully resembles the music that my parents were listening to when they were my age. It isn’t for me and not for the generational/nostalgic issue but because it landed in my lap after Cauldron‘s record this year which put a more inventive spin on catchy 80’s rock. This one ended up being background music for me largely due to the flat guitar work, repetitive rhythms, dull pacing and weak vocal delivery. Felt a bit too ‘Bananarama does metal’ and not enough ‘L7 goes Priest‘ for my tastes.

Heavy psychedelic rock trio The Golden Grass might be from Brooklyn, New York but you’d think they’d dropped from the womb of height of late 1960’s UK heavy rock scene. Self-described as a mix of “heavy-country-funk-boogie” and “progressive-psychedelic-freakbeat” this translates on ‘Absolutely’ as a bit of southern 70’s rock humping its way into the bell-bottomed ambition of British prog/hard rock champions. You might fire this damn thing up thinking you’ve got it figured out in the first five or six minutes but where The Golden Grass excels is in their hidden hand, a bag of tricks that pull from an extensive and incorporated knowledge of retro rock’s best. The full listen isn’t the dreamy sort of psychedelic rock record but rather an anthemic blues-boogie driven by fairly memorable songs. ‘Absolutely’ changes things up, uses many different sounds and textures to keep it going and ends up undeniably hip after a handful of listens.

Cincinnati, Ohio blues/psych rock band Brass Owl had this EP sent out in June and I’m not entirely sure if it was meant as a teaser since the promo was four songs and the album has seven. Either way it shows a bluesy jam band hitting upon a fairly rote bar band sound. The guitarist/vocalist had actually won a shred contest in the 90’s and performed with Steve Vai for some time, leading me to believe this would be something a bit extraordinary in terms of composition but most of Brass Owl‘s guitar work actually feels a bit ham-fisted and the vocals don’t always keep up. Didn’t have much fun with this one until “Mushroom Sally” tossed in a pretty solid jam session.

In approaching this Finnish ‘timeless progressive rock’ band’s second album with zero assumptions other than some admiration for the album artwork I found myself perplexed by the scope of influences arranged into ‘All Will Be Golden’. As if that central theme of inclusive mindset translates to welcoming music from all across the globe with hints of Santana, Grateful Dead, some Krautrock influences, 70’s ‘world music’ ambitions, and a huge dose of Weather Report. I found quite a lot of repetition, which surely comes from the influence of jam bands and German experimental rock music, a bit dry but I liked the overall glossy joy expressed by Superfjord.

I listened to quite a lot of Hellacopters as a young adult and it seems I can’t get through your average modern Swedish hard rock record without hearing their influence. In the case of Uppsala, Sweden heavy rock band Wheel in the Sky I could be way off. Could just be the accent. What sets these guys apart comes with little extra hint of early 70’s The Who and mid-70’s Status Quo with a pretty damn dark lyrical focus thrown in. I like the chilled out, mid-paced feeling of the album and the jangly heavy rock sound. It’d be alright if they broke up the ‘stoned’-easiness once in a while and kick out a bigger jam but the focus of this record seems to aim for an easygoing semi-progressive style.

Spacetrucker offer a pretty ripping sound on their second full-length as they continue to mix desert/stoner rock rides with the bulbous fuzzy riff chunks of 90’s grunge adjacent monsters. It is kinda like post-‘Stoner Witch’ Melvins (which is uh, a lot of things… but stick with me) with that fat sound fried to a crisp and kept buzzing at a later Kyuss level of weirdness. I don’t think the ‘Mystery Machine van in space’ artwork does their groaty stoner/grunge riffing sound justice as a first impression. The bluesy wail of Nebula dry-humping ‘8-Way Santa’ era Tad works out pretty well for Spacetrucker thanks to a beefy, raw sound. Great grooves, meaty kicks, and if they’d cut about 7-8 minutes off the ass-end of the album it’d be pretty solid. Definitely looking forward to what they do next.

Yet another stoner metal band from the Midwest United States and this one serving up an ultra generic band name and a pretty slick luchador mask up front. Though they give the impression of a band like Dozer initially Fuzz Lord offer a thinner sound, underdeveloped song structures, and a very mild an mid-paced stoner/doom metal record. If you’re going to name your band Fuzz Lord, bring the damn guitar sound front and center unless we’re just talking about body hair or whatever. In fact we’re talking about the rise of Satan, the perfect inspiration for a heavy metal album and they just don’t quite pull it off unfortunately. Most track have long, drawn out fiddly intros and then buzz into a set of pretty average slow-to-mid paced doom riffs before fading out. I’m sure I’m just being a twat but I never warmed up to this one.

From the depths of Chillicothe, Ohio we travel far and wi… Oh, like an hour drive up to Columbus, Ohio to check in with Weed Demon, another stoner/doom metal band with Satan, doom, and weed on the brain. Originally self-released in mid-2017 and on vinyl this summer, the debut full-length from this band basically sounds like Conan and Slomatics with throaty vocals and a big, thudding sound that is so bass heavy it nearly implodes in every song. While I think this sound lacks any real dynamic range when set to speakers, you never quite know if it is the digital transfer’s fault or the mix of the record. I love the big sound and the dramatic, muscular vocals but they don’t quite keep up with more thoughtful songwriters like Monolord or Bongripper who have equally eruptive sounds.

Did I miss your favorite 2018 stoner metal or retro hard rock album? I’d like to know if there are any 2018 releases you loved that didn’t get enough recognition. Drop me a line to tell me! It is always worthwhile to speak up for the lesser known stuff. Please remember you can contribute to my Patreon @ only $1 USD per month ($12 a year) to help keep me in front of the computer writing about metal. Thanks.