Hours have passed in the muted candlelit glow of this ritualistic haze created by billowing incense and the warm reflection carefully polished silver implements provides. Dehydrated and on the cusp of a retching cough held fast thanks to the adrenaline surge brought forth from spilling blood atop sacred bones, your leather throat-chanted incantations continue for hours. With now unquestionably serious devotion the ritual succeeds and an occultist necromancer born. To crush the holy ways and defy the will of whatever damned God rules the minds around you no better method exists than resurrection of the dead. Yet Madrid, Spain based occult death/doom metal band Spectrum Mortis conjure far more than basic spells of necromancy and incantations of Satanic doom. With each release they develop a stronger knit piece of their enraptured ritualistic extreme doom metal canon.

Previously a rolling boil of blackened occult death metal tightly wound and septically growled a la Adzalaan or Antiverum on ‘Blasphemare Nomen Eius’ (2016) this second EP drops some of the cryptic insanity in favor of further developing their Necros Christos esque death/doom powers. Though they have not lost their fiery edge ‘Kadosh’ is a focused, highly atmospheric death/doom ritual as eruptive as it is devoted to the spell cast. As spiritual antithesis and grotesque opposition to a record like Salem‘s ‘Kaddish’ this EP finds Spectrum Mortis bringing brutal and defiant strength in equal parts atmospheric death metal and death/doom. A well-dented hammering a la Ophis gripped by the ripping ‘new old school’ deathly cacophony of bands like Vanhelgd or Abythic.

The major point of induction comes with “Fiat Nox” as Spectrum Mortis show all faces and sides within one eight and a half minute song. From there ‘Kadosh’ invokes a sort of occult blackened Hellenic diabolus with “Et Filius Aurorae” as a colossal doom riff meets snaking blackened death riffs seamlessly, and repeatedly, throughout. Sold. At 26 minutes I found myself pining for another ten if only to elevate this level of craft to full-length status. I believe Spectrum Mortis are on the cusp of fully differentiating themselves from comparable groups as they show some great mastery of atmosphere and riff alike on this second EP. Whether they are already masters or a ‘band to watch’ might depend on your love of ritualistic occult extreme metal ethos and death/doom riffs; As a fan of both I highly recommend the experience. 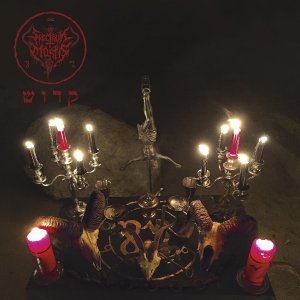