The great defiant king of the Lapiths of Aeolia (ancient Thessaly, Greece) and son of the equally god-defying Phlegyas most often appears as brutal parable in teaching the consequences of dishonoring the traditional Greek customs of ξενία (xenia); This mutual respect between guest and host emphasizes a staggered exchange of gifts: The guest arrives with a gift and asks no questions of the host until a meal is shared, the host caters to all needs and provides a gift as the guest exits the household. Violation of this most basic respect for the host is most famously the cardinal sin in the works of Homer, with the kidnapping of Helen most certainly qualifying. Xenia as goodwill towards the less fortunate is more clearly a major focus of Apollonius Rhodius‘ Argonautika as Jason and the Argonauts sought hospitality between treacherous isles on their long adventure to reclaim his kingdom. For King Ixion‘s tale, told with region/era-dependent patriarchal lineage, the refusal to pay for his bride (Dia) with a promised gift drove his father-in-law (Deioneus) to mildly depraved equestrian theft and set into motion Deioneus‘ murder and Ixion‘s impending doomed madness. Instead of focusing on the endpoint of the story, an eternity of agony strapped to a great flying flaming wheel (or banishment to the torment of Tartarus, depending who you read), the tragedy almost appears to see transgression of xenia customs as more corrupt than kin-slaying; This is compounded by Ixion being welcomed to the halls of Zeus, where he now characteristically violates xenia again by lusting after Hera (the wife of his host). He inadvertently ends up fucking a cloud made to look as Hera and sires the Centaurus, key bloodline to the Ixionidae (centaurs) before being slapped with a thunderbolt and tortured for eternity.

The story of Ixion has twofold interest as both a parable for hospitality (more generally, for respect), but also a lost piece of Greek tragedian history with pieces authored by the masters (Sophocles, Euripides and Aeschylus) all proven to have existed through mention yet with no surviving texts available. I’d first heard a summary of the tragedy in a focused study of Greek Tragedy in college several years ago, a time when exploration of modern death metal’s greater underground was likewise full-blown as a personal hobby. Though the two interests had no hope of connecting until October of 2014 when House of Atreus‘ first EP ‘Into the Brazen Bull’ (2013) was recommended to me off the back of praise for Sacriphyx‘ debut full-length. My first reaction was the same as most, that their sound is basically a more ‘heavy metal’ version of Arghoslent‘s ‘Galloping Through the Battle Ruins’ and the semblance and timing of their arrival lined up almost perfectly with the now decade long hiatus of their decidedly more controversial Virginian stylistic blood-brothers. More importantly House of Atreus‘ draw from the high standards of bands like The Chasm, Arghoslent, and Armoured Angel in writing melodic death metal songs that are distinctly driven by classic speed metal as much as they are late 80’s/early 90’s death metal. This includes the lyrical focus whereas Arghoslent set the bar high in terms of literacy and lowered it with dogged racism, House of Atreus appear to admire the controversy but not the follower mentality and instead generally focus on the wealth of Greek and Shakespearean tragedy.

Formed in ~2010 as Ashened, a solo project from Minneapolis, Minnesota musician Anxietous Nero (Dan Huddleston) a full band would associate under the name House of Atreus by 2011. The first demo, ‘Demo I’ (2011), immediately planted its feet into the project’s distinctive sound and while most of these early songs have made it onto their full-lengths the melodic/Hellenic black metal feeling of the second half of the demo has lessened since. Discovering House of Atreus in 2013 seemed like a mystic alignment for my own tastes as brilliant lyrics, speed metal riffs, and a cover from Rotting Christ‘s ‘Triarchy of the Lost Lovers’ all pointed to greatness in my mind. ‘Into the Brazen Bull’ was only a small primer for the band’s Dark Descent Records debut ‘The Spear and the Ichor that Follows’ (2015), a source of great excitement. Ribbed for its distinct production value that expressed a certain hollow rawness it seemed that Andy Classen‘s master for House of Atreus‘ debut really aimed to replicate the rumble of records like ‘Gates to Purgatory’ or ‘Skeptic’s Apocalypse’. I personally felt it was entirely appropriate for their 80’s heavy metal influenced guitar work with a ‘dangerous’ and raw sound, at least enough to have placed it high on my best of 2015 lists. Though I could still understand how the crossover of melodic death metal and old school death metal fans expected something more dynamic. After some two months with the follow up, ‘From the Madness of Ixion’ I can assuage completely any worries about sound or production.

Immaculate in their standards and in no rush to print, House of Atreus took what must have been two full years to polish and perfect their sophomore full-length and in doing so they’ve assured a new peak in songwriting alongside some further characterization. This is a band of riffing peoples, the sort that values impact and resonant movement succinct enough to carry memorability with more than just energetic delivery. There is a mind-gripping focus on both House of Atreus full-lengths that intensifies slightly on the second. This attack does absolutely nothing to dissolve some of the warranted ‘Incorrigible Bigotry’ comparisons but with some closer examination these musicians operate with less anxious rhythm in mind, and merely use the same jumping off point of mid-80’s German speed/power metal. The major value of House of Atreus‘ guitar work comes with how they resolve their ideas differently with greater variance in pacing. In my mind this is enough to escape the endless comparisons made.

The thrilling gush of the first three tracks of ‘From the Madness of Ixion’ does eventually give way to “Cordelia”, one of the stronger tracks from the project’s first demo. This pulls in some of the vitally needed blackened ethos of their beginnings and flows seamlessly into what I’d consider the restful centerpiece of the album’s (briefly Varathron-esque) melodic interest. “Call to Thee, Concubines” should appear as a point where the listener is reminded of the full range of this unique style of epic and melodic death metal, that they are just as thoughtful as they are savage. This mounted ride into slow-motion warfare followed by a trampling victory march afterward is in the tradition of the greatest 80’s heavy metal records; To have this arc translated into thrashing and frantically melodic death metal is a highly repeatable transcendental experience. I find this crossing of power and death metal’s fiery paths truly energizing and wildly gripping of the entorhinal cortex. No doubt this is one of my favorite modern bands and with this album they’ve extended their worth beyond surrogacy of the inactive bands they mildly resemble. ‘From the Madness of Ixion’ is a triumph, a perfect study of death metal’s darkness applied to epic heavy metal’s boldest trekking. In writing memorable, flowing, riff-driven works complimentary to their impressive sound I am able to consider House of Atreus‘ second full-length as one of the best death metal records of the year. The experience comes with my highest recommendation and rating. 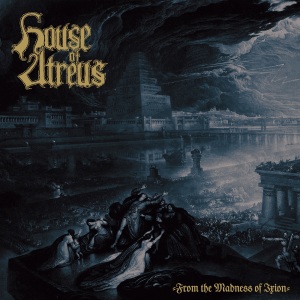