Now in their lucky thirteenth year of unholy union Hamar, Norway mad butchers Deathhammer state plain as day that they are steadfast and determined to spend eternity spreading their high-energy, low-bullshit witching metal curse. Chained to the cretinous ethos of the ‘Show No Mercy’ and ‘Black Metal’ influenced formative years of Destruction and Sodom, Deathhammer show no signs of slowing down or losing interest in the tightly wound traditional blackened speed metal they’re known for. Sounding like the ADHD bastard children of Aura Noir and Nifelheim from the start, the duo of Sargeant Salsten (Torpedo) and Sadomancer (Black Viper, ex-Black Magic) appear as seasoned professionals in 2018 with their fourth full-length ‘Chained to Hell’; A ripping half-hour tornado of old school Teutonic speed metal in service to neck-spinning riffs that could only have been acquired in exchange for their eternal souls.

Always fast but loose as a boot-stuffed ass in their early years, Deathhammer notably tightened their timing and upped their overall precision following Sadomancer‘s short-lived collaboration on Black Magic‘s ‘Wizard’s Spell’ in 2014. I wouldn’t suggest that their first two full-lengths were sloppy or off-time but a more serious fire burns beyond the ‘Nekrothrash’ split EP they did with Nekromantheon, Töxik Death, and Carniwhöre in 2013. So, while Black Magic basically became Blue Öyster Cult since Sadomancer left, Deathhammer went nuclear with ‘Evil Power’ (2015). Throwing napalm for riffs and conjuring the sort of energy that puts any true rival to ‘Infernal Overkill’ in the last 33 years to shame, ‘Chained to Hell’ is bolt-pistol hit of instant speed metal gratification beyond expectations. Deathhammer just have ‘it’, that perfect intuition for the mid-80’s speed metal sensibilities that put them just one step ahead of (no less impressive) local contemporaries Shakma and Condor and up on the same pedestal of some of today’s most proven greats like Aura Noir and Whipstriker.

“Into the Burning Pentagram” offers certain proof of my seeming hyperbole as a head-bangingly satisfying display; That type of ‘thrash exhibition’ that becomes a lost art in modern heavy metal riff-craft and something only an apt study of 80’s rhythm guitar innovation could create. For all of my personal enthusiasm for classic German thrash and the generations of church-burning, leather-whipping Satanic speed metal spawned across the globe since, I can only argue that Deathhammer stand tall with their peers and not necessarily above the greats. The highest compliment I can give any album in this style is that it is on par with, again, ‘Infernal Overkill’ which is a personal favorite and the record that all in this field must stand up to riff-wise. There isn’t a Deathhammer record that doesn’t come close and I’d say ‘Chained to Hell’ at the very least knocks nuts with Destruction‘s finest hour.

The riffs could hold it all together if they had to but, it helps that the production values are tuned just right. ‘Chained to Hell’ is appropriately rubber-band tight and analog feeling without any senseless reverb or overblown guitar tone. The album wouldn’t bear repeating for long without the howling Paul Baloff-meets-Schmier performance from Salsten, who somehow outdoes his crazed work on ‘Evil Power’ with an ever growing goddamn soundboard of shrieks, screams and echoing frenzy. There is little I’d skip over here and as such my recommendation will be fairly high, especially for thrash heads and satanic speed metal die-hards. For preview I’d point to the beast-striking “Threshold of Doom”, a stand out blood pressure-throttling ripper, otherwise I felt like “Rabid Maniac Force” and the previously mentioned “Into the Burning Pentagram” had the biggest riffs to kick around. Highly recommended. 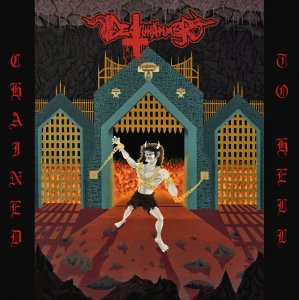 Leave a Reply to Metal of the Month: October’s 15 Finest Releases (2018) Cancel reply