Not to be confused with the abandoned former Hell Town south of Cleveland, Ohio that would see two government forced cessations first to expel Native Americans and a more recent relocation/buyout for Cuyahoga Valley National Park expansion; But rather Cincinnati, Ohio’s Helltown which now comprises the eclectic Northside neighborhood. Now known for demographic diversity, progressive values, and a haven for many of the city’s ‘creative class’ of peoples; The neighborhood originally founded as Cumminsville before annexation into the greater Cleveland morass took on the “Helltown” name due to the hard-partying reputation of its population of working class immigrants and factory workers in the late 1800’s. Traditional doom metal influenced heavy rockers Electric Citizen named their third full-length after their hometown for perhaps a myriad of reasons but it seems perfectly natural provenance as they gain a greater sense of collective self, a heightened confidence, after a period of experimentation.

Lumped in with the retro-heavy psych and nigh proto-doom metal renaissance of the last decade, Electric Citizen set themselves apart with their sights set on the Zeppelin and Deep Purple-esque early 70’s big riff chucking, keyboard honking sound that initially drew as many apt comparisons to Uncle Acid & The Deadbeats and Pentagram as they did to a lesser resemblance of fellow female lead groups like Blood Ceremony and Jex Thoth. Their debut ‘Sateen’ (2014) was perhaps intentionally silken in its approach to psychedelic hard rock with a sound that felt more like ancient heavy psych (with a ‘Vol. 4’ twist) than modern stoner rock, or even the occult rock pouring out of Scandinavia since. To say that they’ve atoned for the sound of ‘Higher Time’ (2016), which folks still suggest felt too similar to Blood Ceremony, I would at least defend that sophomore album especially considering the style of ‘Lord of Misrule’ directly in contrast; That said ‘Helltown’ is heavier as a mid-to-late 70’s Sabbath-driven hard rock record that goes further than ‘Sateen’ did, stripping all excess and focusing on getting the point across 3-4 minutes at a time.

Whereas keyboard work had largely begun to define the melodic interest of Electric Citizen‘s sound, ‘Helltown’ gives the reigns back to the chemistry-thick duo of guitarist Ross Dolan and vocalist Laura Dolan. Consider the resulting record a mix of early Orchid–esque tonal range and bluesy dynamic production that feels massively ‘heavy metal’ without ever going full blown Dungeons & Dragons or heroin chic enough to scare off the stoned-intensive psychedelic rock crowd. Much like Budgie, where their rock was too damn heavy to lump in with the chillest heavy psych crowd, they’re still fully capable of a slow-jam. As driven by the biggest Sabbath grooves as ‘Helltown’ is, Electric Citizen set their sound apart from the overgrown retro-psych peer group they were once compared heavily with by sheer virtue of being heavier, nut-kicking hard rock from start to finish.

Riffs arrive with purpose are arranged into distinct songs; This appears as a mark of maturity that many bands never figure out, to arrange with meaning and move beyond a scene-relevant, plagiarist-structured proof of concept for sake of a style-evocative ‘sound’. That isn’t to say that Dolan keeps up with Dolan, though, as charismatic and full of personality as the vocalist is. The vocal performance reads a bit like a ‘bar band’ jam more often than not. While I love the sort of impassioned early NWOBHM inflection of Laura Dolan‘s voice, I found myself wanting just a bit more dimension despite how warranted her wailing is on a big rock record like ‘Helltown’. Ultimately that is the most important aspect, and main reason why I highly recommend this third Electric Citizen album, it hits hard and doesn’t waste a minute fucking around. For preview I suggest the ripping opener “Heart Attack”, the “War Pigs”-meets-“Under the Sun” dynamic of “Father Time”, and the empowered swaggering poetry of “Mother’s Little Reject”. 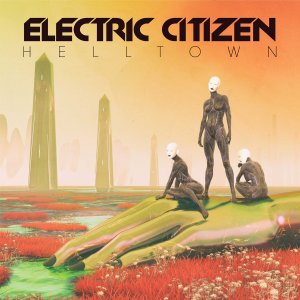