Serving as grand presage to the looming threat of a new album, Göteborg heavy rock band Hypnos smartly released an energized and tightly performed ‘live in studio’ set of performances earlier this April that acted as a sort of ‘greatest hits’ from their first two albums. ‘The GBG Sessions’ introduced the elastic pipes of vocalist Linus Johansson (Trial, Black Cyclone) whose passion for classic rock and metal spews from his 70’s Halford-esque tone. Johansson‘s performances, with no disrespect to Phil Lindgren, are just the extra shove of personality Hypnos‘ retro heavy metal-tinged hard rock songwriting needed. ‘Set Fire to the Sky’ is less a re-imagining of the Swedish band’s sound and more a resuscitation of the fire that made them notable on their 2014 debut.

Hypnos find a balance between the melodrama of ‘Heaven and Hell’, the relative chill of ‘Chinatown’ and the fiery wailing of ‘Sad Wings of Destiny’ showing deeper flashes of NWOBHM-era heavy metal grit amidst their usual dynamic 70’s-fed songwriting. This comes as a shock of great energy compared to the mildly subdued, sometimes downright gloomy, ‘Cold Winds’ (2016) which was more Mountain and less Horisont in retrospect. These guys have some greater love for Thin Lizzy that shows up a bit more with each release and despite having heard scores of Lynott style balladry in 2018, “Tell Me Goodbye” and the title track hold up pretty well. ‘Set Fire to the Sky’ won’t get its fangs into your bloodstream with its ballads, though, the real clinchers this time around come with the greater range offered by Johansson.

Despite this new invigoration, successful integration of a powerful new vocalist, and even more classic heavy metal touches amidst the free-wheelin’ retro heavy rock vibe my head sort of flits between two separate sonic personalities offered on ‘Set Fire to the Sky’; The first is that NWOBHM-esque boogie-hard 70’s heavy metallic ‘epic’ side (“Caught in the Night”, “Looking Out”, “Get Out”) and the second is a bluesy early 80’s barbecue havin’ dad rock groove (“Ain’t No Fool”, “Set Fire to the Sky”, “Tell Me Goodbye”). It isn’t a duality so much as it gives the impression of a transitional record serving as a bridge between old and new eras. There is enough middle-ground covered to bind the full album into a dynamic listen, although sampling tracks at random might yield mixed expectations.

So, in touting the album’s variety it becomes difficult to suggest certain tracks for preview. Distinct rock songs with classic structures ultimately ‘make’ Hypnos‘ third album which ends up being quite strong and memorable. “Deadline” is an epic centerpiece suddenly followed by the folkish respite of “Time is Running Out” and this occasional juxtaposition of ‘moods’ appears more for the sake of differentiation than tracklist flow. Per my heavy metal leaning tastes “Caught in the Night” and opener “Get Out” clicked with me most, but I’d also recommend “Ain’t No Fool” in preview to pick up on the bigger picture of Hypnos‘ sound. You will feel that 70’s heavy rock vibe immediately and it comes with an album that doesn’t take itself too seriously. Because it brings such high energy and varied tonality ‘Set Fire to the Sky’ is easy to recommend. 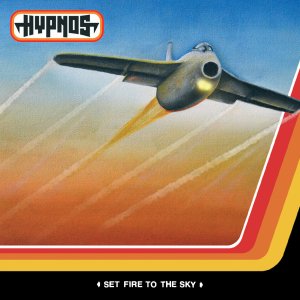