One of the most infamous and memorable progenitors of grindcore, Terrorizer have an inspiring origin story that begins with now legendary drummer Pete Sandoval (ex-Morbid Angel) connecting with members of nascent Los Angeles area hardcore punk/grindcore bands Majesty, Nausea, and Unknown Death. The Terrorizer that most people know and love to this day was an ‘after the fact’ funnel of the best ideas from that bank of songwriting between ’86 and ’88 with some additional songs pulled from Nausea and refined in the form of ‘World Downfall’ (1989). Released into the aether well after the band had broken up, and recorded by Sandoval, his Morbid Angel bandmate Dave Vincent, Nausea vocalist Oscar Garcia, and brilliant guitarist Jesse Pintado who was months away from joining Napalm Death, ‘World Downfall’ was this perfect anomaly of grindcore that couldn’t have been more exemplar of the sub-genre’s spirit while simultaneously featuring what would be a hugely influential game-changing drum performance.

From that point the band’s discography gets mixed attention from grindcore fans as Pintado ejected from Napalm Death and Sandoval more or less a free agent during a very extended Morbid Angel hiatus; Terrorizer was reformed with Anthony Rezhawk (Resistant Culture) on vocals and Tony Norman (Monstrosity) on bass. This saw Pintado coming straight off of what many considered Napalm Death‘s strongest material to date and Sandoval firing back after the somewhat lukewarm reception to ‘Heretic’. The album was an exciting return of a long-lost brand with a new death metal leaning sound that was closer to Resistant Culture and Lock-Up. With Pintado dead a year later on tour the project appeared finished and I think I was one of the few who was entirely deflated by this, as I enjoyed ‘Darker Days Ahead’ (2006) for its almost outrageous, bellowing sludginess. For all of the years listening to Terrorizer I figured the mastermind and songwriter was largely Pintado but Sandoval would more or less reiterate on ‘Darker Days Ahead’ with a follow up featuring Dave Vincent and key members of Resistant Culture with ‘Hordes of Zombies’ (2012). With Morbid Angel still in need of a time-out and Sandoval recovering from back surgery the third Terrorizer album was quickly forgotten and the project was presumed by most as ‘over’.

By 2013 Sandoval‘s back was up for more drumming and this came with the revelation that he would not return to Morbid Angel. The reformation of Terrorizer came about from casual sessions with Lee Harrison (Monstrosity) on guitars and would become more serious as they recruited Sam Molina (ex-Monstrosity, ‘Rise to Power’-era) and began work on ‘Caustic Attack’ around 2014. With a clearer head since 2006, this new album in-ear, and twelve years removed from the Resistant Culture era of Terrorizer I feel alright in saying that -this- album does far, far more justice to the original sound of the band than the mushy flapping of ‘Darker Days Ahead’ and ‘Hordes of Zombies’. The focus is still prone to Slayerized death metal tangents (“Infiltration”) but the return to a pure and punishing form of extreme hardcore is an excellent surprise. The precision hammered punkish grind sledge of ‘World Downfall’ is at least replicated and surely expanded on ‘Caustic Attack’ in a satisfying way.

To think in 2018 I’d be describing a new Terrorizer record as fairly technical and dense is actually pretty exciting and the album’s 50/50 split of ‘World Downfall’ style grindcore and moderately complex death metal riffing feels like an unexpectedly bold stroke for musicians so well established. The beauty of ‘Caustic Attack’ might largely be in those call-backs and sharp riff changes where the level of precision will be impressive for longtime fans and folks with great nostalgia for ‘World Downfall’. I was not at all expecting to be able to take ‘Caustic Attack’ seriously but I’ve found every spin of it’s 44 minutes energizing on the same level of Nausea‘s incredible return back in 2014 with ‘Condemned to the System’. The energy flinging off of Sandoval‘s kit is palpable and it is apparent that producer Jason Suecof, best known for his work with The Black Dahlia Murder and recent Monstrosity and Deicide records, demanded perfect takes every time on what is thankfully a grand showcase of Sandoval‘s versatility and speed.

No doubt this record will win back many folks who felt the last two records were abortive. Beyond the long-awaited return of Sandoval comes a surprisingly deft guitar performance from Harrison, who is best known as a drummer but functions as chief songwriter for Monstrosity in all of their incarnations. My own expectations for a Terrorizer record come from what I suggest as the Cryptic Slaughter standard, that is a band that can run through every possible hardcore punk structure and dynamic and cram a transformative, genre-cumulative work into ~30-40 minutes. There are few groups capable of this and ‘World Downfall’ took over as my own gold standard decades ago when it functioned as a gateway from thrash/crossover towards extreme metal. If I can be convinced by this iteration of Terrorizer I would suspect its value will be apparent from the first notes of “Turbulence”, so I won’t prattle on too much more. I will say that this is as worthwhile an entry point into grindcore/deathgrind as ‘World Downfall’ was for late 80’s/early 90’s death, hardcore punk and thrash metal heads when it came out. Highly recommended. 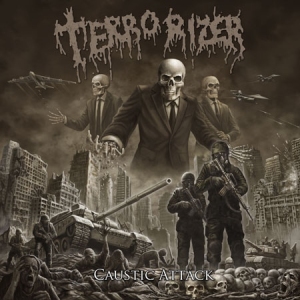