Conceived and in the works since 2013 the debut album from Polish/British duo Eternal Rot began as a fusion of death metal atmospherics set to lurching slow-motion stoner/doom metal influenced grooves a la Druid Lord and Hooded Menace. In fully realizing ‘Cadaverine’ multi-instrumentalist Peter Mayer and vocalist Grindak have opted for starker, more oppressive atmosphere clouded by heavily distorted bass tone and guttural death metal snarling. Although I would have previously aligned their sound with bands like the underrated Gloaming, now I would steer the death/doom fan closer to an early Serpentine Path sort of edge in describing Eternal Rot‘s debut.

The most immediately obvious tic affecting ‘Cadaverine’ is the echoing slap of the programmed drum patterns that drive the experience. This will either sound starkly loud and artificial with good headphones or, it will sound eerily brutal on large speakers. The drum sound immediately reminded me of the weird sort of amateur death/doom oddities you’d find on Wild Rags Records in the early 90’s. The rasping atmospheric growls and heavily processed muttering heard on “In Their Decaying Eyes” appears much like an extremist’s vision of early 2010’s Hooded Menace as if one had only heard the ‘Gloom Immemorial’ compilation. Despite some of the rough edges on Eternal Rot‘s self-guided production the complete package ended up being worthy of repeat listening.

The complexity of vocal and atmospheric layering on display throughout ‘Cadaverine’ creates a compelling anxious gloom that moves just fast enough to rile up the listener but chugs without enough variation to give the impression of motion. As such the listening experience is akin to being chained and tortured, set free long enough to feel the ecstasy of escape, then captured again. Eternal Rot present themselves as a monstrous beast that would stomp and growl to drive away the unworthy; As such there is some difficulty connecting to the simpler, repetitive rhythmic ideas that dominate ‘Cadaverine’. Where ‘Grave Grooves’ hinted at some groaning catharsis, ‘Cadaverine’ suffocates and crushes the skull without feeling. “Slough of Despond” comes close to proving me wrong, though. It is tough to know exactly what sort of death/doom metal fan to recommend Eternal Rot to despite their obvious and previously mentioned similarities largely due to the issue of the drum machine. It comes with a reasonably high recommendation nonetheless. 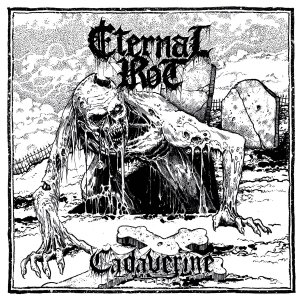