Whether you’re blaming Fred Rogers or Søren Kierkegaard for a generation’s existentialist incompatibilities with the slow-groaning death of capitalism under their feet, the promise of ‘something better’ appears even more cruel as the psychotic prevalence of the fear of missing out replaces the ultimate fear of the unknown. There is little wonder left in the world for folks tethered to on-demand satellites pinging herd-stroking misinformation by the byte, creating perpetual dependence within a premium paying collective idiocracy. Yet so many persist in their own herd out of necessity and well cultivated helplessness. Though the masses have doomed every possible recourse the present age remains a prime era for the artisan and any black sheep with a specialist point of view. The oldest questions mankind cannot answer still need asking per generation; As always art is the slow-motion communicator and music the most effectively universal instigator of profound thought. Yet Boston’s finest atmospheric sludge metal doyen Morne strike their own chronic depression as iron to smelt into catharsis and greater meaning. The tunnel vision of pain and suffering associated with loss, separation, and the resulting dysthymia comes in earnest from the bellowing doom metal of ‘To the Night Unknown’. Morne thrive in creating catharsis without a second spent pandering to a false sense of hope.

With thirteen years of growth and change between four full-lengths there is a definite sense of ‘progress’ and modernized ambition apparent across Morne‘s discography. Formed in 2005 and in-gear by 2007 Morne would essentially follow a similar spiritual path as fellow atmospheric doom/crust punk blood brothers Agrimonia where the supreme divergence of Amebix and the governing Neurosis-lead post-metal movement converged into certain harmony. They were dead serious and ready by 2009 with ‘Untold Wait’ an unforgettable mix of atmo-doom and crusted hardcore punk thanks to the vital leadership of Miłosz Gassan, founding member of Morne and a legend for his work in deathly Polish crust act Filth of Mankind. From there the project essentially leans away from the crust side of things towards what I’d consider a cross between melodic death/doom production and structures treated with atmospheric sludge metal style. This is most evident on ‘Asylum’ (2011) and their material has expanded upon that style since. ‘To the Night Unknown’ feels all the more serious and affected but doesn’t shake its approach far from ‘Shadows’ (2013) tree.

Presuming doom metal’s existential anxieties were created in service to visible apocalyptic horizon during the tumult of the Vietnam War and re-branded with increasingly extreme hopelessness during the tail ‘end’ of the second Cold War era then Morne arrive decades later with a form of doom metal appropriate for those of use staring at annihilation from our doorstep. This resignation into full-blown depression is much less the outsider’s catharsis in 2018 so, as touching and honest as Morne‘s poetics are, what differentiates their latest record comes with what will surely read as cliche: Confidence, wearing a bolder being after a deep molting. A muscularly round guitar tone avoids shying away from the –riff- and in this sense avoids the post-metal tag almost entirely; ‘To the Night Unknown’ instead epitomizes the pointed struggle of doom metal from the perspective of the ‘evolved’ (but duly frustrated) soul of their crust punk ethos. The appeal of this approach is wider than many comparable albums because I believe it will hold similar weight with both melodic death/doom fans and atmospheric sludge metal fiends thus, it is easy to recommend.

Any release from Morne has instantaneous appeal with clear and modern production that isn’t sterilized with modern rock gaudiness so, the already high standards post-2011 are upheld glowingly. ‘To the Night Unknown’ is a grower that makes a strong first impression with some patience and to the established Morne listener those words will be little more than comfort so I might emphasize that it is the projects darkest hour (and seven minutes) in terms of tonal heaviness. There is no sense in previewing tracks piecemeal for an album so endearing in it’s connections and building atmospheric value but “Scorn” and “Night Awaits the Dawn” will at least reinforce some of the observations made herein. Highly recommended. 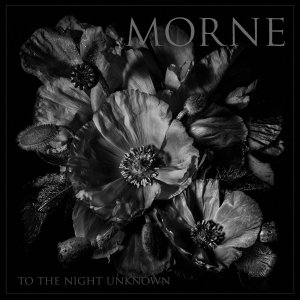