Here I present a ten album sampler of some floaty post-modernist metallic wonder and/or post-sludge, post-metal, post-nudes, post-anything releases I’ve so far overlooked this year. Consider it a loosely themed soundtrack to your weekend spent trying to get lost inside the walls, misunderstanding Proust, and joining a hipster writer’s guild and being the most ‘far-gone’ one in the basement. Most of these albums made it here to Ten From the Tomb because I couldn’t manage the time for a long-form review or because I really didn’t have more than a paragraph or two’s worth of insight beyond banal description. Some where just too dreamy to curse with human words. If you don’t like post-metal oddities, relax! This’ll be back every seven days with 10 more albums from different styles, genres, themes, etc.

Hey! Don’t dive in thinking this will all be post-metal and sludge with post-rock ballads,eh wait actually that is basically what you should expect… But, I generally skipped over gimmicky shit in trying to find releases that at least manage a damn good concept or redeeming sound… Some sort of depth. I post a poll on Patreon every two weeks so that Patrons can pick between genre/concepts as I dig through hundreds of not-yet-reviewed releases. This isn’t always much a collection of dregs and my own ignorant floundering but rather a selection meant to convey diversity within underground/independent rock/metal music’s sphere of influence. Keep in mind I’m not an expert on post-rock at all, so if I reference it I’m largely just talking about the guitar techniques. Think my opinions are trash and that I suck? Want to totally tell me off, bro? Click away and let’s all live more sensible lives full of meaningful interactions. I’m too old and bored with people to care.

Again we begin in the frigid darkness of Finland where this ethereal kraut-ish post-rock project made up of ex-Circle members creates a wave of molasses slowed experimental post-music that crawls, jiggles, and shimmers as it soldiers on. Pelagos serve to entangle your sense with a gloriously layered but easygoing set of post-rock songs that are bright and bubbly, a strange contradiction to the typically soured DNA of most Finnish music. This is one of the more texturally satisfying listens of the year and I’d at least recommend “Sea of Tranquility” as a primer for the flow of this album.

From the tip of that oddly beachy Finnish diving board comes the plunge into nigh death/doom darkness with depressive Italian post-rock/doom metal band Rome in Monochrome. This one lands somewhere between alternative rock balladry and Opeth for me, kind of like of Katatonia had a different sort of edge in their later state. Incorporating shoegaze into doom metal is actually incredibly successful but I think the lyrics need a bit of work as some of it was very good, very honest but other lyrics were patently terrible. After many months coming back to this album I felt like it was an album I didn’t really like that I can highly recommend, the initial induction into it’s sound is actually very moving but with repeated listens I found only “Between the Darkness and Shadows” really stuck with me over time.

This Scottish post-rock duo is exactly the sort of thing I find largely substance free. A beautiful voice hindered by a modern style of music that allows for little more than repetitive, moaning vocal patterns. As haunting and gothically charged as this is, projects like Delerium have already taken this sort of music to new and interesting levels in electronic music and adding in the fascia of post-rock dulls its intrigue into something impersonal. I enjoy the crystal clarity of Midas Fall‘s but the range shown here is so strangely limited that I end up missing the point of such a quiet, shivering tonality next to what is largely worthwhile synth work. But I’ve placed it here so that if/when this list of albums is experienced in order, it will provide the ultimate vulnerability before things begin to get heavy and increasingly reckless. 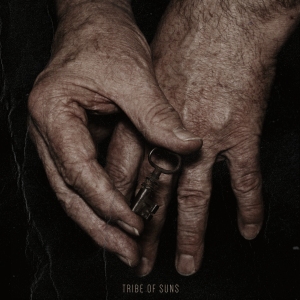 The Sludgelord Records‘ first year has been banner thus far with a wealth of interesting bands finding a home for their left-of-mainstream sounds. Among the more ripe of the bunch in the roster comes Sheffield based Archelon, a project that sought to basically find a more sincere connection between progressive metal and sludge metal. The result is essentially a post-rock informed atmospheric sludge metal sound that is largely downtempo and ‘Tribe of Suns’ begins to feel like a stripped down progressive doom record in it’s quieter moments. I’m not sure they need the sludge riffs to have the same impact but there is just enough of a hint of Neurosis to it all that I had a good time with Archelon. The mood grows heavier, darker still.

Flood Peak is a blackened atmospheric sludge metal band from Portland, Oregon formed between members/ex-members of atmosludge/post-rock band Sól. Both projects more or less play around with the extremes introduced by bands like Neurosis but Flood Peak generally sticks with a subdued, slow grind rather than a loud-quiet-loud sort of deal. If the ‘blackened’ part scares you a bit, it is actually a bit of a strange descriptor as no real black metal elements come into play here rather it only describes a dark tone and vocals that are just average shouted atmospheric sludge in nature. Does not really hold up next to bands like Churchburn and Nest, and the really lazy album art doesn’t help sell the damn thing.

Although I think their songwriting is often all over the place this Irish atmospheric sludge metal band have a pretty compelling sound. At times it feels a bit like a sludge metal version of late 90’s aggro rock with a sickly Bono shouting in the background but most of the time Raum Kingdom are belting out big atmosphere. They’re pretty upfront about the Neurosis and Tool core influence but I think they take those ideas into something more amorphous. I can’t say it is a pleasant listen but at least a very unique take on atmospheric sludge metal.

Zatokrev is a Swiss band that seems to have taken a lot of influence from Cult of Luna on this first album, originally released in 2005. In remastering it’s fairly rough sound to a listenable level ‘Zatokrev’ almost serves to show how little atmospheric sludge metal has changed in the last thirteen years. This is probably a bit heavier than some of the material that would come and sounds quite amateurish compared to their 2015 album but the band’s core approach hasn’t really changed with time. I am somewhat impatient with releases like this as they don’t necessarily achieve the atmospherics their totem genre suggests and instead it feels a bit like a messy attempt at a Crowbar album, minus the melody. From this point in the list atmosphere begins to recede and riffs begin to surface. 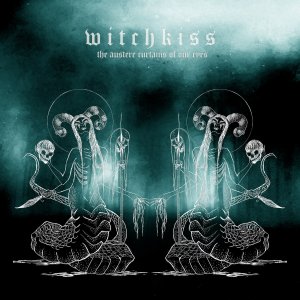 Don’t let the raw hammer of “A Crippling Wind” push you away too hard. New York sludgers Witchkiss come across kinda meat-headed at first but their sound eventually becomes more atmospheric a la Chrch with some neofolk-ish stuff not far from Aerial Ruin in some respects. What kept me from doing a full review really amounted to a few negatives outweighing most of the good feedback I had. I think the production is all over the place with the vocals often mixed very loud and the heavier riffs don’t really stick as much as the slower, gloomier parts. The only performance that I felt unnecessary was vocalist Scott Prater as his overly enthusiastic hardcore shouting really has no relation to the rest of the album’s instrumentation nor does it gel with Amber Burns much more dynamic performances. That isn’t to say I didn’t like ‘The Austere Curtains of Our Eyes’ but it’s flaws kinda banged up any full listen I gave it. 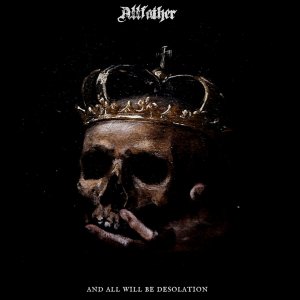 On their second album Rochester hardcore/sludge metal mashup Allfather continue what I’d call their Victory Records sort of take on sludge. ‘And All Will Be Desolation’ kinda reeks even more of their sleeve-worn 90’s rock influences but remains cognizant of the Hatebreed school of chug and Mastodon riffs aplenty. If they were just a thick-booty hardcore band I’d warm up to them a bit more but I don’t think they really hit upon sludge metal outside of necessity; The ‘sound’ of sludge marries their influences and buries some of the less successful style transitions. The impression I’m left with is a very basic 90’s hardcore album with some modern NOLA-rock informed guitar work here and there. Not a bad deal overall, not quite Black Tusk good, but close. It serves as a nice pick-me-up before this ride ends with the heavier hitting Lesser Glow.

The heaviness you’d likely been waiting for impatiently. Boston atmospheric sludge modernists Lesser Glow aren’t concerned with atmospherics so much as they have a hugely atmospheric sound. ‘Ruined’ is a merciless sludge/doom metal record that shifts between soft ‘Crack the Skye’-esque clean singing and harshly shouted diatribes. If they’d cut out all of the harsh shouting they’d be unstoppable. This is one of the better atmosludge/post-metal records so far this year and a fitting peak in our journey from soft to hard.

Did I miss your favorite 2018 post-whatever album? I’d like to know if there are any 2018 releases you loved but thought didn’t get enough recognition. Drop me a line to tell me! It is always worthwhile to speak up for the lesser known stuff. Please remember you can contribute to my Patreon @ only $1 USD per month ($12 a year) to help keep me in front of the computer writing about metal. Thanks.