The East Bay’s most violent answer to the rising tides of thrash metal in the early 80’s came from the suburban party pads of Antioch, California around 1984 and with hardly a hint of the worldwide sphere of influence they would create among thrash and death metal’s most exalted apices. With the extreme attack of Dark Angel influenced ‘Illusions’ (aka ‘Chemical Exposure’) now a wind at their backs, and the concurrent development of a new breed of deathly extreme technical thrash metal alongside Hellwitch and Atheist pushing them forward Sadus were at the cutting edge of extreme metal in 1989. Five years baked into their ambitions the four-piece had finally gotten their big break in signing to Roadrunner Records and if there was a more technically capable death/thrash outfit beyond, most folks wouldn’t know it until late 1990.

In fact Atheist‘s ‘Piece of Time’ had been delayed two years and Hellwitch‘s ‘Syzigial Miscreancy’ seemed to have an equally rocky history with Wild Rags at the time. I mention these other records as true contemporaries that set the stage for the style and adept musicianship offered on Sadus‘ second album ‘Swallowed in Black’. Losing neither the steam nor the brutality of their self-released debut Sadus had arrived with their bassist’s ambitions taking the aggressive death/thrash style into heightened, progressive state. Steve DiGiorgio appeared as an overnight virtuoso and remains in high demand several decades later for the distinct style first showcased on ‘Swallowed in Black’. DiGiorgio had not developed those skills in a bubble and his band-mates crafted one of the most intricate and aggressive albums still considered ‘classic’ thrash metal. In particular the interplay between guitarists Darren Travis and Rob Moore was so complex and inspired you could hear it’s influence upon scenes all over the world from Obliveon, Mass Psychosis and Disciples of Power to fellow Bay Area morphlings Hexx. Whatever it took to achieve this hyper-technical magic, it’d only last a short while longer.

Blowing up alongside bands like Sepultura, Deicide and Obituary would open the doors too enticingly for DiGiorgio‘s ambitions; Sadus wouldn’t ultimately survive the momentum crushing interruption of his biennial stints in Death and the exit of their second guitarist. That said ‘Swallowed in Black’ and ‘A Vision of Misery’ are among the most impressive technical thrash metal records ever recorded and their influence upon progressive death metal and technical extreme metal worldwide is still felt today. Sure, all of this has been said before but I think my own contribution to paraphrasing the band’s legacy comes in giving Travis credit for his unique and hugely inspired vocal performances; Although I think Kelly Shaefer (Atheist) is an easy comparison the difference is a thousand percent more clear in a live setting as Travis is a thrashing beast on guitar while still managing the equally complex and expressive vocal patterns heard in their most ambitious era. Seeing Sadus live, even if ‘Out For Blood’ absolutely sucked, did a lot to elevate my own admiration for the band towards idolatry.

‘Swallowed in Black’ is a perfect snapshot from the precarious brink of extreme metal’s first glance at greater exposure and major label support. In looking back at the many, many incredible records from this era it is easy to lose sight of Sadus‘ contributions but impossible to ignore their stamp left upon the annuls of death and thrash metal style. It is a rush of adrenaline perpetuated by equally frantic and thoughtful music, written with more dynamic sense and aggressive detail than most anything labeled thrash metal before it. For all of the love that bands like Demolition Hammer, Atheist and Coroner get today it is a wonder that ‘Swallowed in Black’ isn’t just as quickly validated as an equally vital moment. We don’t need Sadus to revive their old ways, nor pander to nostalgia in the future; All that is important to me as a longtime fan is that folks continue to celebrate this incredible, innovative technical thrash metal record well into the future. 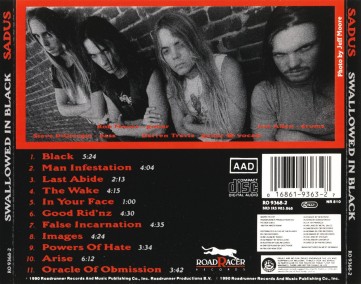