Across the last decade a quietly brilliant handful of Norwegian musicians have grown louder with an inspired sort of art-house renaissance building steam behind their typified Scandinavian exploration of psychedelic occult death metal. With the hardworking exploits of Execration, Obliteration and Sulphur amassing global interest alongside Swedish contemporaries so rises a hungrier, even more viably thrashing generation of Norse insanity. Who are the next in line worthy of your krone? Cleaver and Reptilian are both on the cusp of bigger things but the second full-length from Fusa based thrashers Sepulcher heralds their earned and mighty place as noteworthy underground phenomena. ‘Panoptic Horror’ might offer little more than an ‘expected’ amount of growth in the space of three years upon first listen but, with rumination came a revelatory and addictive death/thrash experience.

‘Mausoleum Tapestry’ (2015) was such a flood of ideas that it carried some inevitable conflict due to rough  shod transitions between ‘Hell Awaits’ influenced thrash, tangential modern atmospheric death metal, and cacophonous raw production values a la the first Reveal album. All of the young band’s ideas were more than promising and the album is no less valuable today yet, ‘Panoptic Horror’ makes its predecessor sound like a demo compilation. How so? In hosting the spirit of 80’s death metal and wearing that confrontational thrash metal geist like a bullet-belt, Sepulcher aggress upon the wandering retro-futurist death metal of groups like Morbus Chron, Ghastly and Execration; They aren’t so much adding to that cluster of style but instead outdoing those influences in creating a directional and aggressive form of it.

At face value this shouted, post-modernist death/thrash record is almost kin to Zombiefication‘s ‘Below the Grief’ with its harsh railing vocals and guitar work that explores complex, genre-bending performances; The major difference comes with core song structures on ‘Panoptic Horror’ appearing largely rooted in classic heavy/speed metal. The overall sound is a bit like Deceased‘s ‘Fearless Undead Machines’ but rethought through Morbus Chron‘s later output. Or alternately as if Reveal‘s ‘The Nocturne of Eyes and Teeth’ were recorded by Cadaver circa ’91 and printed in 2018. Complex death metal tirades melt together with speed metal’s focused classic rhythms amidst hardcore/crust punk influenced intensity and it all makes for an album of confoundingly brutal occult havoc. Sepulcher deliver exactly the sort of record I live for; The sort of project that serves influence from extreme metal’s history but also takes note of current influences. This type of conception is not possible without a passion for extreme metal’s curious outliers and exists in good taste.

This was not as easy of a sell for me as it might seem, at least when considering my ‘Albums of the Year’ for the previous two were from Temisto and Execration. The abrasive shout that drives Sepulcher‘s attack isn’t varied and offers little to no tact to the record; I’d eventually made a sort of concession that I couldn’t fault Slaughter or classic Slayer for this approach and came to enjoy the uncompromising barker’s urgency as an expression of honest outrage. Accommodations made in spite of it’s hysteria weren’t what tipped ‘Panoptic Horror’ towards being one of the best albums of the year for me, it all boils down to the thrash metal core of Sepulcher‘s style sparking continual interest across the months I’ve sat with it. Whenever possible, fire up “Towards an Earthly Rupture” and when that intro is done melting you to a gooey puddle of band t-shirt and boxer shorts you’ll start to understand where I’m coming from. Those sort of moments don’t ever get old and showcase a songwriter who understands that every track on a full-length must count; Without these sorts of instrumental ‘hooks’ there is no hope to otherwise cut through the noise of myriad stylistic clones and vapid extreme metal bands that rely on style points above musical statement.

I’ve given ‘Panoptic Horror’ my highest rating because (for my taste) it is simply one of the most vital releases of the year. Sepulcher transcend a retro-futurist death metal model by honing in on the most primal death and speed metal structures and extrapolating their lasting appeal through a modern and well-balanced take on death metal. I would suggest that they appear effortless in achieving what so many of their peers have been fumbling with since the release of ‘Sweven’ in providing a musically valuable shaping of progressive intent with classic influence. For preview “Corporeal Vessels” offers a window into the hard-thrashing spirit of the album and the ‘Soulside Journey’-esque atmospheric complexity of the performances should be immediately gratifying. Apart from the already mentioned “Towards an Earthly Rapture”, I wanted to also suggest the pairing of “Ethereal Doom” / “Abyssal Horror” for their Agrimonia-meets-Morbus Chron sort of style that helped solidify the album’s value across repeat listening. The rest will prove its worth just as easily. Highest recommendation. 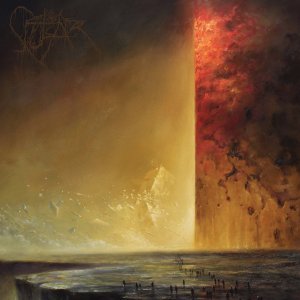