In positing the conundrum of the correlation between fluctuations in population and food production political economist, and devout Anglican, Robert Malthus felt he had discovered a great divine law imposed by his creator; The connection between societal growth’s stunt when faced with famine has long carried a darker shroud as fodder more useful to corrupt dictators and miserable oppressors around the world. Nutrition is a freedom slowly delegated away from the poor in most societies, knowingly preventing their growth and limiting their power as a population. Although Malthus would dedicate much of his professional life to creating food security for the public and as a watchdog for the unfair, false, and exploitative behavior of aristocratic inhumanity his ‘great work’ remains a common sense tool of democratic suppression. To refer to anything as ‘malthusian’ often suggests strategic population control and in teaching the concepts of malthusian models one of the ‘go to’ examples comes from an Gorta Mór, The Great Famine across Ireland beginning in the late 1840’s. With a hundred thousand dead in the space of seven years this relatively modern tragedy exposed corruption and cruel discrimination that left Ireland and it’s diaspora far more leathered and cynical for generations after. None of this spirit is lost upon the storm-channeled chaos of Dublin based atmospheric black/death metal project Malthusian who finally shape their influential miasmic sound into a debut full-length in the form of ‘Across Deaths’.

With down-under groups such as Portal and New Zealand’s Ulcerate serving as a blurring effect upon the musical potential of atmospheric brutality and experimental production, a powerful connection was made between the dissonant calamity of Deathspell Omega and the technician soul of underground death metal. Herein lies the genius that flooded both black and death metal scenes to a peak around 2014-2016 and now appears less frequently each year since. Among the most powerful but now-slumbering records from this movement came from acts like Abyssal, Mitochondrion, and Antediluvian to name just a few but the Irish thirst was not far behind with groups like ZOM, Vircolac and perhaps most anticipated presence of Malthusian. Formed in 2012 and featuring a group of fellows from Ireland’s premier esoteric doom underground Malthusian offered a brilliant half hour demo ‘Demo MMXIII’ (2013) that bore appreciation for it’s focus on dissonant tonality and less on production tricks and cavern-core adjacent sounds. Each member brought diverse credits to the table though none of their resumes hinted at the distinct approach the band would take.

You will feel the collective extreme doom metal experience coming from the line-up more often on ‘Across Deaths’ than previous releases. Main vocalist/bassist PG (Mourning Beloveth) and current Conan drummer JK (ex-Altar of Plagues/Abaddon Incarnate) provide rhythms that play brilliantly off the nigh improvised sounding atmospheric blackened death metal wanderlust that is Malthusian‘s guitar duo of AC (Wreck of the Hesperus) and MC (On Pain of Death). The path is never linear and continually twists and lurches forward as ‘Across Deaths’ finds the band staked in death/doom pacing and edged-along by rhythms that build towards a point of release that rarely comes; Consider it a concentrated analog to Grave Upheaval‘s more recent triumphs. No piece on the album celebrates this tension better than the cello and violin grinding aches of “Primal Attunement – The Gloom Epoch” a thirteen minute ruminant centerpiece swollen with a glorious sense of agony. Don’t let me overstate the sluggish aspects of the record so much as celebrate their more memorable status amidst the adventurous guitar work prominent on the rest of the album. The frantic Portal-esque blackened/death riff runs that express themselves in dissonant movements you’ll expect post-‘Beneath the Hengiform’ (2015) are there and still define Malthusian‘s sound more than anything else.

The production value is texturally soggy and thudding compared to their EP and this was my only real gripe with repeat listening as it’s sludgy tone buries some absolutely incredible guitar work that appears less remarkably arranged than it is. The whole of the Malthusian experience works incredibly well in the forty minute LP setting and ‘Across Deaths’ appears all the more savage and barbaric with it’s clotted production. I still think this will be a small issue for some, but it is easy to look past when seeking a first statement from a band and not looking for any immediate grandiose conceptual re-thinking; That is to say if you liked Malthusian in the past, you will still love them in the present. That great sinking feeling of anxious dread still comes in droves at the hands of their guitarists and three distinct vocal styles.

If you’re not a fan or have no previous indoctrination into the murky, steaming darknet of atmospheric and dissonant death metal ‘Across Deaths’ is not the perfect entry point. If you’re not used to roman numerals for demo and track titles, hooded or masked heshers, abstracted dissonant surrealist guitar work coughed out through a leaf-blower at last consider that Malthusian are that expert level bit of refinement; Their debut album is easier to appreciate once you’ve developed a taste for it’s environs and will almost surely appear as a blurry streak of sludgy psychosis otherwise. I personally hear some genius in it’s horror-inducing, psychotic streams of murk and can easily recommend ‘Across Deaths’ as both horizon expansion and a solid delivery upon the style they’ve merely toyed with since 2013. 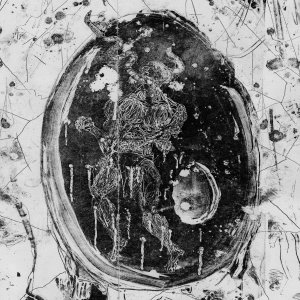