At face value it would seem the dissolution of promising Portland, Oregon heavy metal legends Spellcaster in 2017 was a severance that was long overdue as the line-up saw major shifts in 2012 and disinterest from the founding member (Cory Boyd) lead to his exit in 2016. Less than a year later the sudden exit of vocalist/guitarist Tyler Loney. Two groups, Silver Talon and Idle Hands, immediately sprang up afterwards and they both have some noteworthy semblance of Spellcaster‘s classic and catchy 80’s heavy metal style. Silver Talon is a hard-hitting Priest influenced power/thrash metal band featuring Sanctifyre vocalist Wyatt ‘Lightning’ Howell who are gearing up for an EP release soon; Idle Hands is a more subtle,  treatment of NWOBHM influenced heavy metal and 80’s gothic rock.

Musician Gabe Franco (Seventh Gate, Spellcaster) spent the first decade of his career in metal playing bass but gave no inkling for his inclination as a singer or guitarist; His gothic rock tinged Jaz Coleman-meets-Pelle Åhman performances are reasonably confident. There is some brilliant restraint in Franco‘s delivery as he adeptly navigates bigger melodies and avoids common gothic metal excesses in saving vibrato for moments of greater impact. The vocal performance will surely be the hook and major the point of entry (or detractor) for most folks; Franco‘s voice is anthemic and spins a yarn that is intensely personal in it’s treatment of self-doubt and inspiration. If you’re not open to the gothic side of things at all, you might consider the 80’s metal influence prominent enough to warrant a few listens.

The guitar work, shared between Franco and Sebastian Silva (Leathürbitch, Excruciator, Alpha Viper) is just as vital as Franco‘s vocals in pushing Idle Hand‘s catchy songwriting forward and ends up being closer to my taste than recent records from groups like Tribulation. I am not at all a gothic metal fanatic but I don’t shrug away the entirety of it as I’ve followed groups like Paradise Lost, Sentenced, and Amorphis as each produced at least one reasonably catchy rock record; This is perhaps where Idle Hands fits in best (so far) rather than comparisons to In Solitude‘s ‘Sister’, an album that pulls more from heavy psych and Swedish prog rock with less 80’s post-punk informing the melodies. So, there are a million bands like this in Scandinavia that can out-Goth these guys in their sleep, right? I’d suggest few if any fuse 80’s metal with gothic rock tones as well these Portlanders do.

It isn’t ‘Seventh Son of a Seventh Son’ or whatever but Idle Hands have hit upon a good balance of post-NWOBHM era rock influences scrubbed with mid-to-late 90’s Peaceville three gloom. ‘Don’t Waste Your Time’ wears lessons learned from their days in Spellcaster on their sleeves and shows some admirable songwriting talent along the way. If the ‘gothic’ word scares you off I’d say at least give “Time Crushes All”, “Blade and the Will”, and “By Way of Kingdom” a hit and see if you warm up to their sound. 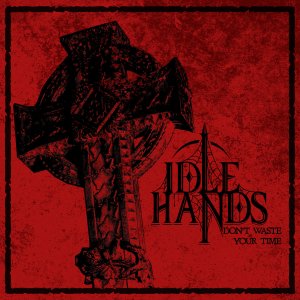