Hailing from the long celebrated blackened port of Bergen, Norway this young and optimistic thrash metal crew arrive with all of the right parts in motion. Psykopath‘s quintet of terror offer immediately resonant, tightly performed old school thrash metal with clear influences and points of inspiration. Glazed with the precision riffing of Kreator‘s ‘Extreme Aggression’, the fiery howl of Lääz Rockit‘s ‘Nothing$ $acred’ and the stomping beats (and fidelity) of Artillery‘s ‘By Inheritance’ this EP is an admirable beginning from the long under-served Norwegian thrash metal underground. ‘Primal Instinct’ is a polished and meticulously realized ‘best foot forward’ for Psykopath though it’s 10 minute length only serves as a quick proof of concept and does little to immediately differentiate the band from the legions of competent thrashers around the globe.

Every riff has a recognizable reference for the classic thrash obsessed fan from the early Megadeth intro of “Lethal Introspect” to the pure classic Slayer break in the middle of “Armageddon”; The most recognizable elements actually come by association with the mixing credit for Flemming Rasmussen (Metallica, Morbid Angel, Pretty Maids) in the previously mentioned Artillery record and a clear bump of that bay area thrash sound a la Heathen and Testament. They’ve got the riff arrangements and overall dynamic of classic late 80’s thrash down but the lead guitars generally lack any memorable interest and the three tracks on deck are all very similar. For a ten minute run it is impressive but if this were a teaser for a full album I’d worry that it’d lack any range.

The one element that I feel is generally without compare is the flattened rasp of vocalist Ivan Taule who provides some wicked gnashing akin to ‘brutal thrash’ that would suggest some capability of jumping towards a sound closer to early Invocator or Forced Entry if need be. If you’re going to sit down and listen to this EP it’s short length suggests you’ll just end up chugging it’s entirety so there is little need for preview but, I do want to emphasize how vital “Lethal Introspect” is in showcasing Psykopath at thier most detailed and intense; The other songs piggy-back off of the first track’s favorable impression. Highly recommended. 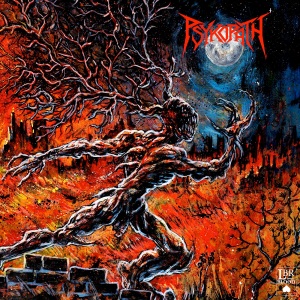