In lieu of becoming too redundant with my appraisal of the Sunlight Studios/Boss HM-2 guitar pedal sound popularized by Scandinavia’s greatest generation of death metal, I’ll at least suggest that it drives away as many fans as it pulls in. Guitar tone can immediately suggest style and push listeners away from substance and it’d be a shame if you might’ve missed out on the best death metal album to come from Saint Petersburg, Russia in the form of Pyre‘s ‘Human Hecatomb’. As much as the project’s debut full-length is driven by it’s ragged, monstrous guitar tone it is ultimately not defined by or reliant on that buzzsaw. ‘Human Hecatomb’ is a raw, neck-snapping hit of 80’s death metal wrapped up in a cyclone of ’91 style tonal gluttony. Pyre‘s love for death/thrash and the hardcore slap of Swedish death metal stir up a violent smoke-belching brew as propulsive and inspired as their spiritual death metal masters.

If you’ve been long overwhelmed by the prolific and competitive world of death metal there is no shame, and perhaps greater sanity, in taking a step back and recounting the classics of the last decade. I would immediately suggest that ‘Human Hecatomb’ was both celebrated and overlooked by many. Their combination of Entombed‘s ‘Clandestine’ catchy raucousness and the burly instant gratification of pre-1994 Asphyx is still infectious. This CD reissue differentiates itself from the initial limited 2014/2015 issues (CD, CS, LP) of the album in a few ways. The CD is in a jewel case rather than digipack and features four early renderings of ‘Human Hecatomb’ tracks in the form of pre-production demos. If you’re already a fan of the album the draw here is perhaps seeing the pure, and perhaps more standard approach of the tracks before they’d been polished for the album. The most interesting extra here for my taste is a cover of Slaughter‘s ‘Nocturnal Hell’ as they not only nail the sound but vocalist Dym Nox (Dmitry Dovzhenko) sounds even more like early 90’s Martin Van Drunen than usual.

Ultimately this reissue is intended for folks who missed out on Pyre‘s debut in anticipation for what I’m assuming will be a near-future new release from the band since signing with Redefining Darkness Records. I can only suggest that it rips harder than you might expect with a cursory listen; Anyone obsessed with the thrash worshiping, pre-death n’ roll days of Scandinavian death metal should find great worth in this ‘ultimate’ edition of ‘Human Hecatomb’. 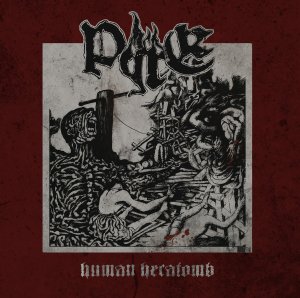