Without shared purpose or true common sense humanity moves towards a sincere and resigned obliteration. In becoming increasingly aimless, hopelessly specialized, and mentally dissolute in the face of complex interconnection the species becomes extinct on a timeline just slightly out of perceptive reach for generations unable to communicate. Largely incapable of evolving due to inbred customs and the ever-persistent cultural fear of nurturing plastic minds it begins to dawn upon us; Surrounded by burning forests and the spitting rage of destitute fundamentalists it becomes clear that our ‘western’ culture of nostalgia and complacency will neither die (nor act) in time for Earth to survive. It is too late. The very air we breathe and water we drink soon become commodities amidst self-important fools without craft or contribution beyond manipulation. Most are already complacent, mystified, and too easily placated in any case. In collecting life’s noisome paraphernalia and compressing a scrapbook of inspired experimentation Massachusetts’ duo Pando make peace with that certain missing ‘something’ in today’s bigger picture of our doomed existence.

Hiraeth is one of many terms used to describe unique cultural ideas and philosophy that remain a challenge to fully communicate in English. The most satisfying suggestion is that it expresses a nostalgic homesickness combined with an appreciation for one’s current status. It brings to mind reminiscence of a nuked place of birth while appreciating the impending nuclear winter. Alright, well whatever the hell I’m going on about should only suggest that Pando are experimental mixed media artists creating music from collective inspiration, with no discernible stylistic thoroughfare, that  carries a deeply personal thread. The ethos that guides the duo’s music on ‘Hiraeth’ is a form of modernist musique concrète in that they find and shape connections between field recordings, samples, and (in this case) voicemail recordings all built around performances from a myriad of sub-genre. I know what most folks are thinking, that I’m describing what is essentially the ‘YouTube poop’ of the Soundcloud/Bandcamp era’s collective output… Yet I’d only go as far as to argue that ‘Hiraeth’ warranted a physical release, uncommon for the plunderphonics obsessed annuls of modern experimental music.

There are just a few elements I stubbornly demand from any piece of music, in hopes that it’s appeal will last, and the most important is live drumming. This is my sole complaint in that the whole conception would tie together and bleed human blood if a session drummer was employed beyond EZDrummer (or whatever program). Otherwise I found ‘Hiraeth’ to be a sort of collection of dead leaves; Ideas formed through experiment, developed to a moderate ripeness and preserved in various stages of life to keep the mind entertained. Experimental music has a befuddling quality that I find both detestable and psychoactively valuable yet Pando balance harshness and chaos with profusely verdant respite. Growling black metal snarls and nightmarish watery synth boil atop trip-hop beats them quickly turn to Japanese flutes and chirping birds that drown out far-distant harrowing primal screaming before a barrage of 4-5 concurrent personal voicemail messages flips into a Dave Porter-esque gothic country-cum-atmospheric acoustic black-something. In short, it goes many places and often finds a peculiar tapestry that is both intentional and wildly inclusive.

I feel no great stretch in appreciating the quietly harsh and oddly reflective web of ‘Hiraeth’ but it’s greater value lies in the -trip- and as such it’s lasting value will rely on your love of music that flails between demanding and purely atmospheric value. While none of Pando‘s output is ‘background’ music by any stretch this latest release only mildly demands the listener’s attention beyond the first few listens. I might have briefly started to wonder why I detest the sound of several indiscernible voicemails being played at once but, either way I had a reaction and that is often most/all of the value of any sound collage. I’m not sure that ‘Hiraeth’ balances the musique concrète with performances perfectly but the experience was increasingly enthralling for a handful of listens. 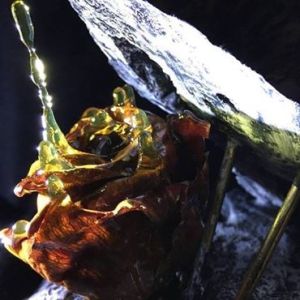