No lesser a deity to his cult but pantheonically a daimon by tradition Dionysus appears in recanted visions and ancient paintings as a winged rider atop a great leopard; Holding a rhyton, kantharos or similar ritual drinking vessel his offering is merely one of many ancient outlets for our instinctual need for human ferality, for loss of inhibition and bucking imposed societal order. Bacchanalia held in secret united the disenfranchised with freeing intoxication facilitated by trance-inducing rhythmic music, invocations, offerings and dances. What little freedom is left in the world two thousand years later arrives with dry realism as the voided, forced mask of feigned spirituality is most visible amongst hapless cretin. What music exists that could be more dynamic with possibilities and emotional timbre than that of black metal? Nihilism, defiant hatred, and ancient spirituality have long been developed as tenets of black metal be it for gimmick, performative quality, or controversy. Just as many spiritually charged, ecstatic and enthusiastic musicians exist within the sub-genre yet few in recent memory channel the head-flinging-backward daze induced by the Dionysian mysteries as Austrian black metal project Sanguinary Trance.

Arriving with little more to divulge than a session drummer and general location ‘Wine, Song and Sacrifice’ is a three movement EP that uses a vine-like rhythm guitar mastery to deliver grand, moving melodies that stretch and bend within a sensual black metal reverie. There is some great ecstasy in the driving, epic reach of the 13+ minute title track as it sets an intense and fairly high bar for the rest of the EP. If black metal’s purist intent was ugliness then consider Sanguinary Trance‘s guitar work too enthralling in it’s smoothly flexing tensions to carry any notable abrasion. Dissonance and contrapuntal rhythms are at the heart of the proverbial ‘trance’ of ‘Wing, Song and Sacrifice’ and in this sense the project is aptly named and conceived. Where I begin to lose some of the plot is in the more discordant and mathematical wailing of “The Dionysus Whip” and it’s fading outro with a static slap at the end. As a point of dissolution it comes as a small shock to the ears considering how pristine and combed-over the rest of the release is.

Too beautiful a stream of consciousness to lump in with most ‘epic melodic’ black metal albums that contain similar ‘Mediterranean’ mystique yet not discordant or furious enough to lump in with the orthodox black metal movement, Sanguinary Trance represent a palatable but shaking sort of madness. The effect is reminiscent of both early Emperor and Dawn as lead guitars exchange melody and intensity as currency feeding streams of grandiose musical statement. Unlike a lot of comparable mid-second wave acts these melodies repeat but do not always resolve, the effect is disorienting due to both complexity and seemingly orbital variations on theme. I won’t suggest it is perfection as the guitar work could be slightly more precise, particularly on “The Dionysus Whip”, and the vocals have some small room to improve as they resign to a background role as a style choice. I am curiously optimistic to see where the themes and instrumentation develop from this point as the melodic arc and rhythmic qualities of ‘Wine, Song, and Sacrifice’ are sublime, yet the modernist dissonance on show is in need of some small amount of preening or revision. 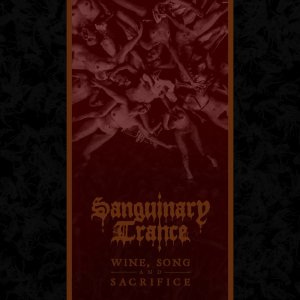