Scandinavian black metal offers a grand graveyard of legendary yet short-lived record labels and Tomas Nyqvist’s No Fashion Records holds fast as a personal favorite discography thanks to it’s early cultivation of the melodic black metal sub-genre. In keeping with Nyqvist‘s enthusiasm for underground groups bursting at their seams with emotional resonance, Mörk Gryning were perhaps a curious choice initially as their zeal for melodic black metal outweighed their skills of execution on early demos. That isn’t to say that either of the ’93 or ’94 demos were low quality but they only barely seemed ready for a full-length on the latter. ‘Tusen år har gått…’ is a great example of how the right producer, a driven project, and a wave of musical innovation can syncopate to achieve higher than expected potential. In every way it met the already high standards of melodic black metal for 1995 and remains a shining, lasting classic within the true origins of the sub-genre.

Combining the austerity of Jon Nödtveidt and John Zwetsloot’s collective songwriting on ‘The Somberlain’, the anxious melodic intensity of Dawn‘s debut, and the growling aggression of Marduk‘s ‘Those of the Unlight’ while incorporating fairly regular use of keyboards to direct riffs and melody alike wasn’t so much a breakthrough but a practice in good taste. The direction offered by producer Dan Swanö was seemingly priceless in getting Mörk Gryning up to speed and playing in time yet, as is confirmed fact, the two members were 16 and 18 respectively when recording ‘Tusen år har gått…’ in early 1995. This has long spurned a collective question mark from the irritable sensibilities of fiercely ‘elite’ Scandinavian black metal fans in supposing it was a manufactured release eating from Dissection‘s bowl but, one might argue that At the Gates and Unanimated were perhaps the true originators and many exceptional bands made classics with their inspiration. If the earnest expression of this record written by teenagers doesn’t come across as convincing, perhaps your own sensibilities are driven by trivia and you’d prefer to stay convinced by gossip-suckling zines released and trashed since before you were born.

In terms of looking back at melodic black metal’s history the discerning fan really must begin to forgive and appreciate the sub-genre’s lofty but unmet ambitions early on as by 1998 most every new release was either an unchanging vision of the early 90’s or a trend-creeping insincere pile of crap. Hindsight is not only available in perfect clarity but the demos and full-lengths from this era provide provenance for who and what drove this balanced refinement into form. Mörk Gryning‘s debut might have seemed like ‘just another’ Swedish black metal record back in 1995, but only because the collective fandom had received fresh classics from Mayhem and Emperor the year previous with a nuclear bomb looming in the winter release of Dissection‘s sophomore album. It makes sense that ‘Tusen år har gått…’ was approached with reductive attitudes in the past but looking back on history it is fairly consistent gem worthy of consideration.

The album’s personal value and interesting history are two different things and in terms of memorable musical content ‘Tusen år har gått…’ is slightly padded with some meaningless atmospheric filler despite it’s 33 minute length. Stripping away it’s grand vision of pacing by way of interlude and keyboard-driven stoicism there is a solid 26 minutes of very focused melodic black metal riffing that should easily sum Swedish melodic black metal innovations circa 1995. In an odd reversal of standards Side B is absolutely incredible and holds greatest depth whereas Side A contains most of the more ‘expected’ compositions that pull less from melodic death metal’s rhythmic innovations and more from black metal’s second wave momentum. “Unleash the Beast” could easily open a Gates of Ishtar or Sacramentum record and the segue into the album’s centerpiece “The Final Battle” is suddenly confident and masterful. If you are as big of a fan of Dawn‘s ‘Nær sólen gar niþer for evogher’ and find time to hear any track from Mörk Gryning it should undoubtedly be “The Final Battle.” So, if you’re unimpressed with the first half of the album I would suggest jumping right to the second half instead of dropping off of it early.

Yes, this old Swedish melodic black metal album might only survive as fuel for nerds like me but I’ve found great value in it’s expressive and intelligent composition over the years. Melodic black/death metal hybrids really do only survive on their songwriting merits as we slowly lose sight of the deepest underground and nostalgia quickly forgets gimmickry to make room for new garbage. In this sense Mörk Gryning will continue to hold value with great thanks to the teenage ambition of ‘Tusen år har gått…’ but also the unexpectedly savage firestorm they’d intermittently create thereafter. 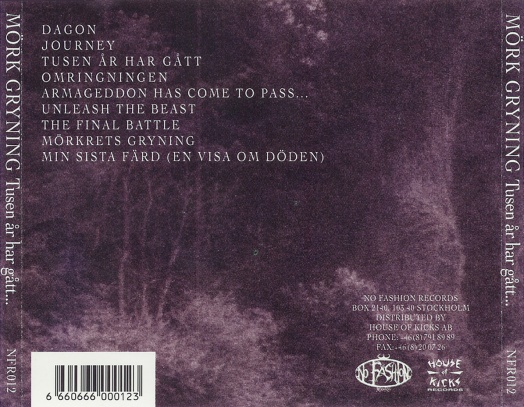