As the long-dragging Cold War brought state and federally funded scientific incorporation and community to several competing nations thus came the death of many myths driven by superstition and baseless guess work. Few flubs died as slowly as that of spontaneous human combustion as forensic scientists and arson experts who collaborated with common sense had few cases to work with and pseudo-scientific paranormal ‘researchers’ spun an entertaining yarn. The trend of elderly women with chronic alcoholism falling near their fireplaces and exploding was eventually debunked as spontaneous, for what it’s worth. With a new equally serious cyber war of disinformation alive and well between the old Cold War opponents today, it seems the traditional heavy metal that burned brightest in the 70’s and 80’s arena of worldwide political tension appears fully re-lit today as history repeats itself; One of many brightest burning torches hailing heavy metal’s timeless appeal is without question Fresno, California based Haunt who bring the heyday of NWOBHM, the wailing guitar work of Randy Rhoads-era Ozzy Osbourne and cross streams with the under-appreciated Snowy White/John Sykes/Scott Gorham tail end of Thin Lizzy on their debut full-length ‘Burst Into Flame’.

As a musician giving it his all and doing a crap-ton of the work himself one could easily start to liken Beastmaker/Haunt kingpin Trevor William Church to Chris ‘Professor’ Black (Pharoah, High Spirits, Dawnbringer) both in his dedication to old school heavy metal traditions as well as prolific but quality musical export. If you’re unfamiliar with Beastmaker, consider them a souped-up, Sabbath-esque, Cathedral–grooved Pentagram on par with groups like Orchid and Demon Eye. Amidst self-releasing a glut of eight four song EPs this summer the grand finale comes in the form of his formerly solo side-project Haunt. This NWOBHM inspired project first struck out into the world with ‘Luminous Eyes’ (2017), an EP that married some of Church‘s resonating gloom with a thoughtful string of lead guitars no doubt inspired by Angel Witch and an inkling of Diamond Head‘s lesser known melodic leanings. It was a start and a promisingly personal take on melodic heavy metal that almost ached with late 70’s hard rock intentions. This notion built some greater momentum as a roll towards ‘Renegades’ and ‘Thunder and Lightning’ era Thin Lizzy can be heard on ‘Burst Into Flames’

Now a full-fledged four piece band including collaborators past/present as well as local Fresno area talent including guitarist John Tucker (Beastmaker), bassist Matthew Wilhoit (Blacked, Worship of Keres) and drummer Daniel Wilson (ex-Hymn of Rlyeh). It still sounds like Haunt is largely performed or at least masterminded by Church‘s vision but when played immediately after ‘Luminous Eyes’ the tone is doubly energetic and the guitar work is impeccably arranged. I damn near bust a button thinking Haunt intended on Satan-esque dual guitar driven majesty with a speed metal tear of the opener/title track but instead ‘Burst Into Flame’ is their own highly melodic beast in service to the classic rock and 80’s metal Church likely grew up on as the son of bassist Bill Church (Montrose, Sammy Hagar, Van Morrison). The result is a stylized heavy metal album that resembles the earliest throwbacks of Ghost, thanks to a knack for harmonized vocals, but with an edge just sharp enough to hang with Cauldron, Spell or Night Demon thanks to some brilliant dual guitar work throughout.

As a debut ‘Burst Into Flame’ is less a modern day classic than it is primarily a strong proof of concept. They’re right on the edge of an In Solitude-esque breakthrough but the vision’s direction appears split between full-on Enforcer or Wolf style retro ‘speed metal’ and NWOBHM-tinged classic rock. The ideas bleed together beautifully but tracks like “My Mirage” feel a little bit too heavy in their nods to well-known, well-trodden inspiration that bands like Gypsyhawk really had the final say with years ago. That note comes down to personal taste and isn’t so much a criticism but minor irritation that came after many listens. The trade-off of emotionally driven dynamic at the expense of energetics isn’t a deal breaker. If you’re built for proto-metal, NWOBHM and more importantly the narrative that connects the two I’d say ‘Burst Into Flames’ communicates the era incredibly well. Haunt makes stunning, memorable heavy metal out of slightly used parts; Consider it the most spirited use of reclaimed materials of the year, and a fine shred-laden, personal heavy metal record. Perfect for the balmy end of  the summer on the eve of the apocalypse. 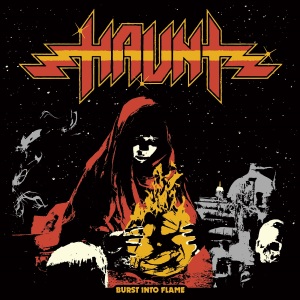