BACKLOG is a “whenever the fuck I feel like it” blog feature focusing on how I’m progressing through video games, old and new, that are stuck in my backlog. Here I’ll generally update my progress in any and all games I’ve touched in the past 2-4 weeks. This includes updates on reviews I’m writing, games I’m looking forward to, thoughts I’ve had, and things I’ve purchased.

A glorious death is scraping at the doorstep of every disenfranchised American as the looming threat of abominable Christian faux-nationalism sticks out it’s neck, just begging for the guillotine to land. Every moment you spend complacent to the encroaching control that multi-national corporations have over your human rights shortens your lifespan and oh boy, that sounds stressful… I dunno, I’ve been too busy playing video games to worry too much. For starters I finally finished the Platinum trophy for Dark Souls: Remastered and to think, I spent about four extra hours zipping through a third playthrough of the game without realizing all I needed was a Stone Shield from those guys on the way to the Moonlight Butterfly fight. It was really no harder or easier than any of the other platinum trophies for other Dark Souls games, and it was actually fun to craft all the boss weapons and replay the game twice. I actually had to get good at fighting most of the bosses. This might sound pompous or whatever, but New Game+ is always the most fun playthrough in any From Software Souls series game. That is basically all I played for the first two weeks of July, I haven’t been making a ton of time for games. Hence few regular updates to Backlog.

This remaster of the first Darksiders game was on sale for $3.00 USD a few weeks ago and seeing as how I had given up on it back on the PS3, despite having fun, I figured it would be an easy way to transition away from Dark Souls while still playing a third person action game. I tried Devil May Cry 4 but oh man, does that game NOT hold up! I actually beat this game last week and will have a full review up soon but for now I will offer some thoughts that won’t really detract from further impressions. There is a wonderful sense of heft and momentum in War‘s movements and attacks that make playing the first Darksiders game very fun, the storytelling is fairly high budget and plays out like a cross between a Blizzard game like Diablo III and a tame version of Todd McFarlane‘s Spawn comic books. The story is simple and adequately presented.

In fact that simplicity is the beauty of this game: It is unadulterated by complicated nonsense. You have a linear path in a relatively small interconnected world and you dash through it gaining powers of traversal and combat. These all tie into boss fights and puzzles. It is even less complex and sprawling than The Legend of Zelda: Ocarina of Time in it’s execution and I really appreciate how polished the remaster is. It won’t be a brutally long review as the game is not complex or deep but I have to say after about 6 hours of Darksiders II this week, the 60 FPS gameplay and juiced up graphics of Darksiders: Warmastered make it a far, far, far superior game despite being about 20% as big as the second game. 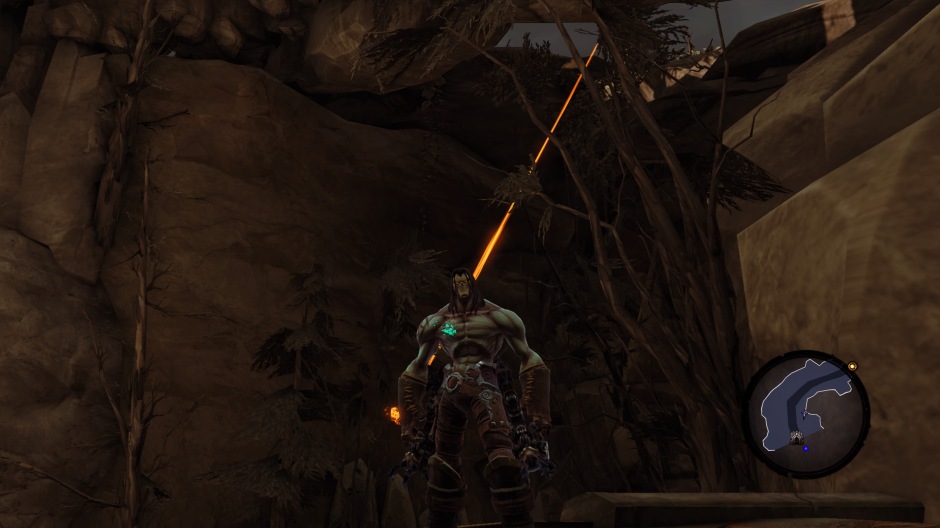 Granted I am only 5-6 hours into the game and have only just gotten Strife‘s pistol Redemption, but I can already say that Darksiders II plays worse and feels terrible compared to the remastered version of the first game in the series. I had this game on PS3 but never really picked it up due to not finishing the first game. Death as a protagonist is weirdly reminiscent of Raziel from The Legacy of Kain: Soul Reaver but the story isn’t nearly as well told. The motion comic recap of the first game is beautifully done but it just shows how uh, not deep the story ever was. Oddly enough the camera and Death also control like an old Playstation era platformer with floaty, weightless combat and Death’s soft wimp ass dying quite easily from the start. I know this is a much longer game that incorporates loot, weapon upgrades, tons of backtracking, plenty of collectibles, and folks have told me it could be a 40-50 hour game if you really enjoy it. I don’t.

Because the combat bugs me, and it runs at 30 FPS (on a PS4 Pro…) I will not be fanatical about digging through every area for collectibles and secrets. I’ve found the dungeons are smartly designed and require you to stop and look around for solutions and there is far less hand-holding compared to the first game. This makes up for the weird combat physics and the need to dodge instead of block… Think of the switch between Dark Souls II and Bloodborne, but you get hit the whole time like in Lords of the Fallen. I know, nonsense from a weird Souls game player but all it means is that the dodging is a mess in tighter corridors and I miss the ability to block as in the first Darksiders game.

As of writing this I’ve barely put two hours into Mad Max so take this with a grain of salt but I figured it’d be worth a try since it was free on Playstation Plus in July. The pitch folks gave me when it came out was that it was a mix of Rage-like car combat and some Batman: Arkham Asylum series combat on foot. An open world post-apocalyptic desert game meant to compliment Mad Max: Fury Road, an honestly great movie that surprised me when it came out. Well I’m still adjusting to the 30 FPS frame rate, despite playing on a PS4 Pro… But so far the story is unfolding at a nice pace and it controls and plays quite a bit better than those loose, shitty feeling Just Cause games that Avalanche usually makes. I hated Just Cause 2 and Just Cause 3 so I was surprised that this has pulled me in so far. It does kind of seem like a ‘gotta loot ’em all’ sort of open world game a la Assassin’s Creed but I am open to see how it hangs for a few more hours. For a free game I honestly couldn’t be happier.

Owlboy is essentially a 32-bit looking 2D action-adventure game that I believe was created almost entirely by just one guy. You’re an owl uh, boy (Otus) and you’re treated like an idiot because you’re mute and not as coordinated as the other owls in the floating village. Look, I don’t know what’s going on in the game. There are temples, pirates, ancient owl relics, and really beautiful 2D animation. The ‘dungeon’ sections so far are part puzzle and part tutorial as I reach the Owl Temple and so far it as been an addictive ride. The mechanics and movement seem awkward at first but soon you learn the game’s language and physics and see the easy flow of combat and movement. I jumped into this game without anything more than raving recommendations and since it is now on PS4 I figured I’m more likely to stick with it rather than on Steam. Shit, I haven’t even opened Steam to play a game for months. I will certainly stick with this game as I gravitate towards this highly detailed pixel art style and hope that the gameplay will continually offer challenge, despite already being moderately complex.

August brings some smaller games that I am very interested in. The number one release coming up soon is Death’s Gambit, a 2D metroidvania style game that tries to go for the Dark Souls-esque mechanics of games like Salt & Sanctuary but with a far superior art style. Guacamelee! 2, which I won’t play. Likewise THREE rogue-like/metroidvania-ish titles are coming soon between 20XX, Chasm, and the full release of Dead Cells. Am I going to buy any of them? Honestly, I don’t think I will until I can play a demo. Rogue-likes always seem fun but I never stick with them (see: Rogue Legacy, Flinthook). September brings a flood of options with Dragon Quest XI: Echoes of an Elusive Age, Immortal: Unchained (seems cool, looks like a shit Piranha Bytes game) and Shadow of the Tomb Raider. Will I leave behind my backlog of 4-5 JRPG games to play a Dragon Quest game, uh… probably. I’m not particularly excited about any upcoming games otherwise.