Reading up on the past discography of a band like Mutilation Rites can be frustrating due to the torrid divide between user reviews, faux-elitist bloggers, and permanently glazed-over Pollyanna-assed reviews from larger outlets. Jumping back to 2011 a plethora of dirt bagged trolls were focused on fashion (somehow?), Mastodon, and whatever paranoid anti-trend nonsense they could come up with: Anyone still writing about how US black metal is ‘still repairing it’s reputation’ beyond like, 1998 is a complete fucking idiot. Anyhow, in the early 2010’s several specific waves of sub-genre experimentation cropped up as young artists hoping to hit upon meaningful combinations took notes from Fenriz. Helped along by booming DIY-enabler sites like Bandcamp and SoundCloud, as well as ecosystems of instant fan connection (tryhard YouTube reviewers) one such wave lucky enough to hit biggest was a trio of sludge, crust punk and the violent morass of black metal.

Mutilation Rites were of that wave and quick to join groups like Black Monolith, Wolvhammer, and Agrimonia in spirit but, leading into their debut full-length ‘Empyrean’ (2012) their sound was closer to Dawn‘s ‘Nær sólen gar niþer for evogher’ (see: “Ancient Bloodbath”) and less ‘atmo-black Martyrdöd‘ as the rest of the world would have you believe. If I read the term “beardcore” one more time I’m gonna shit. ‘Empyrean’ was a break into greater notice, a shift into a higher register of material that dropped off their earlier songwriting at daycare where it belonged. Mutilation Rites‘ core sound was still primarily black metal and generally average in quality at that. As they brought in current Today is the Day bassist post-debut the project also began the process of absolving their sludge/crust punk kicks into more meaningful integration.

‘Harbinger’ (2014) was the result and Mutilation Rites second album was lead perhaps too much by diluted modern Darkthrone-isms and atmospheric meandering. What saved the experience was the sheer hypnosis by way of dual guitar meandering and an ever shifting pace. Consider it a small round peak for black n’ roll, or a high point for a band with mild identity crisis, either way they’ve moved onto something else in the last four years. The direct spin from ‘Harbinger’ to ‘Chasm’ is initially striking in that you can absolutely hear the mark of guitarists George Paul and Michael Dimmitt carrying through Mutilation Rites‘ discography despite ‘Chasm’ being substantially death metal in construct and style.

Consider it atmospheric black/death metal if you will but ‘atmosphere’ isn’t the guiding flame as ‘Chasm’ is gorged with the groove-hurling ashes of early 90’s black and death metal riffs. This is ‘current’ in the sense that many bands are toying with alternating combinations of black and death metal with extended song-lengths and atmospheric candor. It is the mark of 2018’s underground extreme metal gnosis and an incredible playground for me personally. How does Mutilation Rites stand out? They’ve simply carried over that glorious, glistening knack for hypnotic groove heard on ‘Harbinger’ and set it to the growling tones of crusty, blackened old school death metal.

I personally didn’t know shit about this band until I’d heard ‘Chasm’ and figured they were just one of millions of talented ‘new old school death metal’ bands that’d slipped through my fingers. The album gives the impression of a death metal band ‘going black metal’ than it does the opposite and the Mark Riddick cover art and gnarly dripping logo are likewise helpful in setting up expectations. If you’re already spinning in your shorts preparing for an Acephalix sort of death/crust jam, roll up your sleeves halfway and keep that early Bolt Thrower verve in mind but toss in the maniacal black metal of Prosanctus Inferi and some ‘Butchered at Birth’ riffs for good measure. It all sounds so menacing, so analog (or ‘live in studio’) and just oozes with the right stuff. In the process of channeling good taste in death metal whilst retaining their olden chemistry Mutilation Rites have undoubtedly whipped out their best release to date.

How do you feel about riffs, though? I mean ‘Chasm’ has them in scores and spares no luxury in creating pits of cyclical despair and distortion-fueled hammering but they’re not at all leaving behind crustified black metal style. This is where I think Wolvhammer‘s latest album drooped for me and ‘Chasm’ inspires by comparison, using meticulously patterned drumming to fuse sub-genre rather than relying entirely on guitar compositions for style and pacing. Dynamics aren’t always what ‘makes’ an extreme metal trip memorable but it helps avoid buyer’s remorse. The more I listened to Mutilation Rites‘ take on death metal the more it’s long-winded, moderately repetitive hex soaked into my mind; ‘Chasm’ doesn’t offer mystification as much as it does a bridge between effectual old school death metal and quasi-millennial multi-genre plucking. It was less of a puzzle to piece together and ended up being a buzzing heavy blackened death metal record easy to get lost within. For preview you need to hear the wild stomp-and-rip of “Post Mortem Obsession”, the NYDM heaviness of “Pierced Larynx” and the glowering atmo-roars of “Ominous Rituals.” 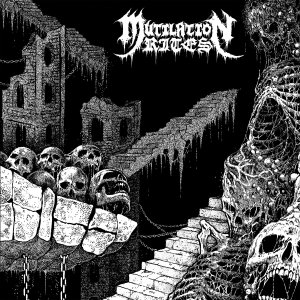