No matter how hard he tried British polymath Charles Babbage could not best his greatest demons. He excelled as a mathematician, inventor, mechanical engineer and even receives credit for the concept of a digital programmable computer. Yet his two greatest passions: Summoning ‘the Devil’ and fighting off street musicians, would never be truly realized. Babbage might have had mixed feelings for Invocation Spells a Chilean first wave black/speed metal who effortlessly summon Satan with diabolical guitar noise and ‘street’ thrashing style. The duo responsible for their blasphemy arrive in 2018 with their fourth album in four years and they’re largely sticking to their guns on ‘Spread Cruelty in the Abyss’.

Heads up because these guys didn’t really bring their A game in terms of riffs until ‘The Flame of Hate’ (2017) where they seemed to channel early Aura Noir with intensified German speed metal and early Darkthrone guitar clangor. This one just builds off of their previous album in every way, intensifying yet unchanging. My barometer for albums in this style involves a dog-eared Destruction ‘Infernal Overkill’ LP, three black candles, and a lot of chicken blood but ‘Spread Cruelty in the Abyss’ comes so spring-loaded with forceful thrashing intensity that conjuring Satan would only feel redundant in it’s presence.

Redundancy could be a fair criticism of most black/thrash permutations if you’re the sort of listener who can only have one ‘version’ of each thing that you’ve deemed superior over the rest. I’ve personally long cast off that pretense. Once you run out of ways to be reductive you’re left with the same 50 albums to dance to for the rest of your life. You won’t be dancing to Invocation Spells so much as seizuring in your damn computer chair trying to keep up with the storm of echoing shouts and hyperactive speed metal riffing that ‘Spread Cruelty in the Abyss’ kicks around. So many modern thrash metal bands miss the point when they focus on composition and technique before they perfect the attack of the music. Thrash riffs should be delivered like a pickaxe to the spine of an enemy, an anxiety driven electric shock just fast enough snap your wrist and make you sweat. Invocation Spells have this down pat since their previous album and they kill it.

Not only can I listen to speed/thrash metal all damn day but. I often do. I’ve been transfixed on Invocation Spells since discovering them on this album. Sure, objectively speaking there are hundreds of black/thrashers out this year and many of them are better conceived, more ‘artful’, original or bold in style… but holy shit like 5-6 bands write riffs I want to hear again and again and more than half are from Chile; Invocation Spells included. So I guess if you’re a black/thrash nut who really digs for a certain ‘attack’ a la Nifelheim, early Aura Noir, and Antichrist (Sweden) then you should be first in line for Invocation Spells‘ fourth album. Highly recommended to black/thrash metal fans in general. 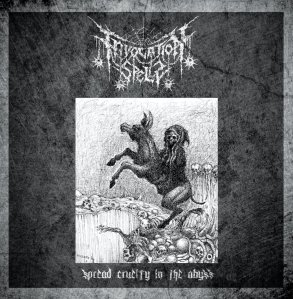