When Harald Nævdal (Daemonaz) and Olve Eikemo (Abbath) decided to branch out together with growing interest in black metal with some thanks to Euronymous they were both barely in their twenties. History now looks at their band in an interesting light and always suggests a brighter spot in mention thanks to their abstention from the mayhemic church burning, murders, and various misanthropy of their supposed peers. Instead Immortal is praised as glorious fantasy metal made by nerds and continue to set upon one of the least pretentious black metal pedestals due to their accessible presence. They’re wild old Norwegian men, portrayed as comically ‘sinister’ as Alice Cooper or WASP by populist heavy metal readerships. To get a ninth full-length from Immortal is like getting a fifteenth from Kreator at this point, it’ll aim broad in style and get it’s butt wiped by standardized production techniques.

My taste for Immortal‘s music starts with a peak of ‘Diabolical Fullmoon Mysticism’ and sets off into a perilous series of dips until the triad of ‘At the Heart of Winter’, the underrated ‘Damned in Black’ and the perfected epic metal approach of ‘Sons of Northern Darkness’. Laugh all you want but the thrashing riffs and crispy guitar tone of ‘Damned in Black’ makes it one of my favorite Immortal records and also the first tour where I had the chance to see the band perform live, dripping makeup and all. Listened to in succession Immortal‘s discography sours with increasingly glossy production that has sucked the life from their already depleting store of ideas. Peter Tatgren‘s increasingly polished role appears to have taken even greater reign on the blown out sound of ‘All Shall Fall’ and ‘Northern Chaos Gods’. It doesn’t help that nothing has been right with Immortal‘s dynamic since the release of (the dumbed-down) I‘s ‘Between Two Worlds’ in 2006. From there it’s been an ‘agree to disagree’ situation in terms of progress, musical direction, and personal issues clogging the future.

I’m sure many will disagree but ‘All Shall Fall’ felt like an inferior iteration of ‘Sons of Northern Darkness’ with an odd loss of dynamic range causing a noisome presence to kill the ‘epic’ tonality of Immortal‘s later legacy; For what it’s worth it sounds better on vinyl. From there Demonaz‘ ‘March of the Norse’ (2011) was a glorious ode to Bathory‘s viking metal age while Abbath more or less iterated on his ideas from I with a self-titled album in 2016… After trying to steal the Immortal name and rights under the rest of the band in 2014/2015. This set low expectations when I learned Immortal was due for a new release, even if it was marketed as their first record since 2009 the albums in between were in no way divorced from Immortal‘s sound or style. The most poignant thing I can say about ‘Northern Chaos Gods’ is that you won’t even notice Abbath is gone, at all.

This is a self-conscious analogy but it fits well enough: ‘Northern Chaos Gods’ is Immortal‘s ‘Archetype’ (as in Fear Factory) where the band’s sound regresses to a prime period of their discography without one of the more distinctive members involved. Immortal‘s Byron Stroud in this case is Peter Tatgren (Hypocrisy) who again provides production and now bass duties. Don’t worry, you will basically never hear the bass guitar without straining through the clobbered mix. It ends up being a loud, senseless ‘good enough’ record that still –totally- sounds like Immortal. Well worth hearing at least, but not something I want to sit on my shelf and collect dust next to greater legends. There is little here to pooh-pooh, ‘Northern Chaos Gods’ really just rehashes Demonaz‘ best ideas from their previous 3-4 albums, again. Some of those were classics and this is fairly rote.

Don’t get me wrong, to listen to any Immortal album is a joy and even their worst album (‘Battles in the North’, fight me!) is a dark fantasy nerd’s black metal wet dream. I see little reason to bother with ‘Northern Chaos Gods’ when spinning any of their last four albums will already suffice. If you’re not familiar with Immortal then most of my words are going to be a bust for you; With that in mind I want to suggest that their discography is even more spirited, memorable, and diverse than this odd blackened heavy metal sledgehammer might suggest with it’s linear train of thought. In no way does ‘Northern Chaos Gods’ live up to the previous standards of Immortal but, it’s hard-stomping blend of black metal and epic heavy metal is a bloody axe-swinging winter warrior I cannot personally resist being murdered by. 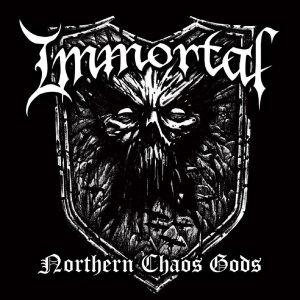