From it’s multiple points of inception across the globe the key tenets of the war metal sub-genre persist to this day yet typical shocking blasts of callous blasphemy and anti-religious terror aren’t enough for bands like Sarinvomit. The reaches of their nihilism go far beyond the Dracula-like curses of bedroom black metal and explode into the realm of total global annihilation. They relish in human suffering while waxing poetic about glorious mushroom clouds, vaporizing bodies and eternal damnation by way of nuclear fallout. To the outsider the sub-genre is a frighteningly non-PC diaper-filler, a hailstorm too raw and formlessly evil to even dip a precious toe into. As a long obsessed death metal fan I think of it as black metal’s ‘brutal’ component and there are multitudes of great bands that toy with war metal intensity and extremism to great effect. Turkish horde Sarinvomit are one of the more approachable sects of these maniacs, especially for those already indoctrinated in the ways of the first wave, as well as blackened thrash metal.

The inevitable ruin of Earth by way of nuclear weapons incites orgiastic howls from Sarinvomit on their debut full-length ‘Malignant Thermonuclear Supremacy’ as they dream of the mass open grave left by nuclear devastation. Though they are gleefully cheering on the death of all life on Earth with their Geiger counters in hand, ticking away wildly, don’t think for a second that this is just another flippant, grinding punk-fest packed two minute shocks of warrior noise. Like war thrashers Filii Nigrantium Infernalium these baphometic philanderers aren’t afraid to hit the 5-7 minute mark with their attack. In this sense they’ve tasked themselves with coherence and structure in multiples of most of their peers. This will be the dividing line for many folks as I know not everyone will feel like they hold their intensity throughout; I might argue that they’ve pulled off a more constant stream of black metal in place of the sporadic thrash riffs and militaristic blasts of ‘Baphopanzers of the Demoniacal Brigade’ (2015) .

Guitarist Godslayer (Deggial, Godslayer Hellblast) leads with a precise club of nails that needles and tears a ravine down the middle of the mix while new drummer K.C. (Sapık İnek) flows between grind, death, and unholy blackened blasts with great precision. That precision lands Sarinvomit on a plane closer to Black Witchery or Blasphemophager and less on the raw side of groups like Morbosidad or Abhorer. There is some finer distinction to make there but the main point is that if you’re a fan of more orthodox forms of black metal ‘Malignant Thermonuclear Supremacy’ could be a mighty step into war metal for the uninitiated and a deeper hit for those already gasping for nuclear winter.

Because Sarinvomit can make a seven minute war metal song feel like three, and carry a 45 minute album better than even the most true Scandinavian black metal bands, I would recommend their debut. It is a numbingly textural war metal experience to soothe the aching spasms of the body as your nose runs, your eyes cry, your frothing mouth drools out vomit in streams until finally your bowels and bladder evacuate your body of all life’s moisture. Exposure does not necessarily mean death but, rest assured humanity’s doom is coming and ‘Malignant Thermonuclear Supremacy’ offers a pretty good escalator of riffs to watch it from. 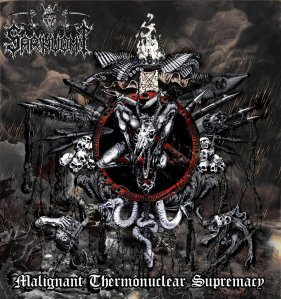