Here I present a ten album sampler of some of the most unceremoniously overlooked split releases I’ve received so far this year. Consider it a soundtrack to your favorite schizo-phonic art house student film festival. Most of these made it here to Ten From the Tomb because I couldn’t manage a long-form review or because I really didn’t have more than a paragraph or two worth of insight beyond banal description. If you don’t like splits and you’re a ‘full-length or nothing’ kinda guy/gal or whatever, relax. This’ll be back every seven days with 10 more albums from different styles, genres, themes, etc.

Hey! Don’t dive in thinking splits are cheap trash, although they are notoriously a dumping ground for B-sides and extraneous material… Splits are very important for scenes, community among musicians, friending, and often lead to future collaborations between members of bands involved. Splits represent kinship, creative juxtapositions, stylistic groupings, shared ideologies and sometimes even competition. Some of them will suck but that’s all subjective, man! I’ll be focusing on the positive aspects of their art with the score attached to indicate my personal verdict. Think my opinions are trash and that I suck? Want to totally tell me off, bro? Click away and let’s all live more sensible lives full of meaningful interactions. I’m too old and bored with people to care. 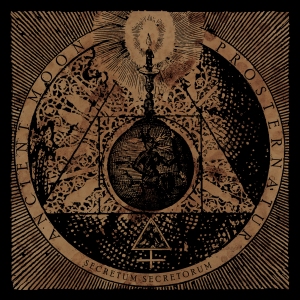 We begin with a split LP between two international collaborative occult black metal projects. The first side is a 18+ minute track from atmospheric black metal/ambient project Ancient Moon. Their style is self-described as ritualistic black metal and their slow-building “Hekas Hekas Este Bebeloi!” makes a convincing argument for this tag as they represent an old school form of atmospheric black metal that combines chilling Norse ambiance with crackling central European distortion. Little has changed since their ‘Vvltvre’ album in 2015 apart from a clearer fidelity and increased integration of ambiance.

The second side comes from Prosternatur who have a similar ambient interest that is kept fairly separate from their more traditional semi-melodic black metal sound. Their occult orthodoxy isn’t restrained as a driving force, but a leading guitar melody and use of atmospheric sound soften the pummeling they provide. I dove headfirst into this side of the split LP and loved their mix of melody and dissonance. Although I have not yet heard their ‘Abyssus Abyssum Invocat’ (2016) full-length yet, I am very impressed by Prosternatur‘s contribution here.

Both sides of the split suffer from some ‘bedroom black metal’ syndrome in terms of production at times, the drums are the only problematic element for Ancient Moon and the final track from Prosternatur “Usella Mituti” starts off sounding artificial whenever the double bass drums kick in. I would have reviewed this full LP but I felt I had very little to say about the actual music as I mused over it’s style. 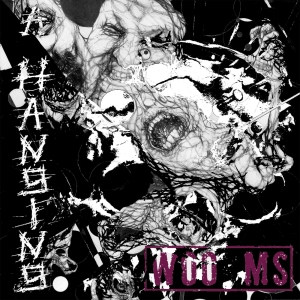 Woorms freaked me out. Their style is a sledging form of noise rock pioneered by Melvins and to some degree Swans that has just a hint of NOLA sludge that translates as a stoner vibe. Their five minute track builds up and freaks out and really highlights this split. By strong contrast A Hanging are a straight up and thumping hardcore punk band verging on the crossover era of Agnostic Front/Prong in the late 80’s. Their bass drum is tuned so loud it sounds like an old Vader album on my sound system. I like their style and the Gary Meskil sounding vocalist overall, but I think Woorms kinda has the advantage here in terms of offering something more surprising at first glance. Top notch, hardcore though.

This split features unreleased content from two war metal projects, one dead and one still living. Deiphago are legends in their own right active in some form since 1989 creating bestial black metal in the Philippines. Their contribution comes in the form of three demo tracks for their ‘Lucifer Alpha Omega’ sessions which served as the basis for their ‘Satan Alpha Omega’ (2012) album. Raw, fast, and punkish Deiphago are old school as it gets and though brutally simple their attack is the best part of this split. The unreleased tracks from now defunct Rhode Island based Ampütator are terrible. Deafening, offensive, noisome and aimless are all the sort of characteristics you’re going to want as a war metal fan but I got no kick out of their previously unreleased songs.

Something far more eclectic and non-metal comes in the form two tracks from Los Angeles gothic/ethereal wave project Black Mare and Russian post-metal artist Offret. They both share some love for Chelsea Wolfe but Black Mare‘s Sera Timms‘ voice and dream-like synths paired with her straightforward guitar work evoke that influence most clearly. I could easily imagine her putting together a heavier album like Choral Hearse and doing quite well. Although I appreciate Offret (Andrey Prokofiev) and his skill in mixing atmospheric metal influences with gothic wave ideas his track didn’t really captivate me compared to Timms‘ song. A quick and mildly exotic listen. 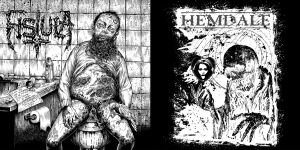 Fistula is the type of sludge I lean towards, the dirty Grief, Iron Monkey, and Eyehategod side of things. They have that wretched early 90’s hardcore grinding fury with just enough doom riffs to hug up onto. Their track on this two song 7″ EP “Whore Cancer” details a run-in with a fraudulent fellow who over promised, delivered goods no one asked for, and later resorted to a YouTube rant where he burned the band’s discography. The story and the rant are funny but the song would have been interesting with or without. Hemdale are a death/grind band who have been around forever and their chuggy, howling mess of a song is redeemed only by it’s theme: Celebration of Miley Cyrus as a talent, perhaps the voice of a generation. I think what always stuck with me most with Hemdale is how even a five minute song feels like it lasts about two. I don’t have particularly informed taste in Mileycore, but the two bands play well side by side. 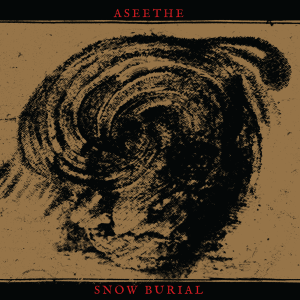 This split 7″ features two post-hardcore bands taking stabs at post-metal/atmospheric sludge metal. Aseethe, a trio from Iowa, comes closest with some borrowed Neurosis riffs and guitar feedback. Turns out they’ve been at it within the realm of sludge and drone/doom for a decade or so. I’m not sure if their track will blow your mind but folks who like small touches of mathcore/post-hardcore in their sludge should check them out. Snow Burial are far more post-hardcore than they are post-metal and everything from the off-kilter Haste style hardcore shouts to the borrowed Mastodon riffs adds up to a less-than Cult of Luna style that fell flat for me. Didn’t do a full review for this one because I couldn’t find enough positives to talk about, though I would recommend Aseethe‘s discography. 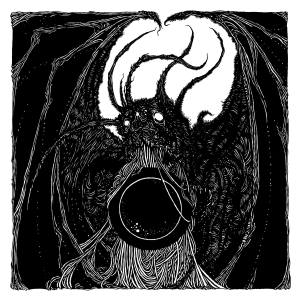 Yet another two song 7″ this time between two promising freshly spawned death metal bands. Desekryptor are more of a Funebrarum type of band in general but also deathly atmospheric. They pound out a bestial tomb’s worth of blasts on their track and slip in and out of surreal tangential noise, likely a small amount of Portal influence. Draghkar on the other hand offer a track that sounds like a 90’s eastern European death metal band cover Celtic Frost. Although they’d already won me over with their mix of epic heavy metal and old school death, this song just reeks of classic first wave black metal as it collides with speed metal… but coming from a death metal band. The closest thing I could think of was maybe Deceased, or Pentacle. Both bands are excellent and come highly recommended. 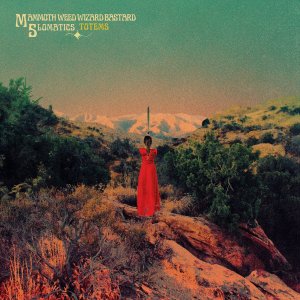 Split LPs are rarely a winning idea due to the fact that you might hate one of the bands and love the other. This time around the two bands are so similar it isn’t such a huge deal but I suppose I can really tell Northern Irish stoner/doom metal band Slomatics have been around for a decade longer than Welsh group Mammoth Weed Wizard Bastard. I’d like to bag on their name but, the name of my site is about as stupid to folks. Though they both play a slow and epic form of doom generationally relevant to the scenes that spawned bands like Electric Wizard, the difference lies in the riffs and the vocalists. Both sides were produced and recorded by current Conan guitarist and well known producer/studio man Chris Fielding. Because of Fielding‘s involvement the release meshes well and would sound like a full-on collaboration if not for the much stronger guitar work and compositions of Slomatics. Mammoth Weed Wizard Bastard aren’t quite there yet but their vocalist Jessica Ball has a unique voice for this style of stoner/doom. 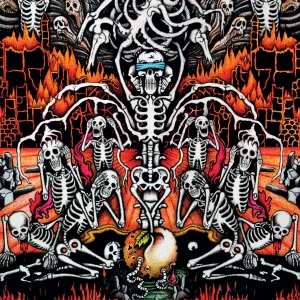 This split is a winner for fans of the Finnish death metal underground as it features two of the more interesting upstarts from the last decade. Axeslaughter play primitive death metal highly influenced by death/thrash, Hellhammer, and Master. The surreal early Amebix-meets-Celtic Frost monstrosity that is “Primordial New Age Dream” is a true highlight for the split and gives well enough reason to check Axeslaughter out, their second track is fairly standard for their style. Cadaveric Incubator are incredible stuff as they’re highly influenced by the early days of Finnish death metal when Carcass took the country’s underground by storm and lead to groups like Xysma, Necrobiosis, Phlegethon adding crawling riffs, brutal (or sometimes burped) vocals and grindingly fast drumming to their sound. Few newer bands do this style as well any more, with perhaps Galvanizer and Nasty Surgeons being slightly ahead of the curve. I really enjoyed this EP and would still highly recommend it.

This split LP is somewhat of a mind fuck thanks to Cokegoat, a Chicago sextet that combing sludge metal, noise rock, post-hardcore and psychedelic tomfoolery into a hogload of manic aggro-ambiance. Though they were arguably more of a death/doom adjacent sound previous, this split release shows an even further progressive sound with trailing sci-fi synth and noise rocked shout-alongs. Barren Heir are a trip from a similar bush but their deal is slow-burning atmospheric sludge metal with a taste for moderate discordance and post-metal. Cinematically charged and flowing as it is, I found myself heavily favoring Cokegoat‘s stuff. I’d highly recommend this to atmo-sludge heads and prog sludge nerds.

Did I miss your favorite 2018 split album/ep? I’d like to know if there are any 2018 releases you loved but didn’t get enough recognition, drop me a line to tell me. It is always worthwhile to speak up for the lesser known stuff. Please remember you can contribute to my Patreon @ only $1 USD per month ($12 a year) to help keep me in front of the computer writing about metal. Thanks.