Kierkegaard was not only a theologian and renowned philosopher but an artist first and foremost. His books, written largely under pseudonym, saw a poet obsessed with irony and metaphor. Characters were often mirrors of his young self, a man conflicted between the then cultural ‘high ground’ of Christendom and his own desired path in life. His art and eventual mountain of great works bravely reflected the conflict at the source of his own crippling issues with anxiety and depression. Existentialism as an ideology offers the most perfectly romantic approach to meaning that comes naturally to the inquisitive artist. Slovak atmospheric black metal band Tujarot embody the path of the self on their debut full-length ‘Existencialista’ as they plunge the depths by their own light. Moderately distinctive musical exploration and decorous taste lands upon listenable ideas but the viscera of the experience lies within Tujarot‘s spiraling atmospheric guitar movements.

Just the term ‘atmospheric black metal’ has a bitter, floral connotation for my tastes in black metal and it seems every listener and musician has a different idea of what constitutes atmosphere versus intentional regressive qualities and lo-fi production. The goal of aberration is a reactive cult where the only insignia is art itself and this self-imposed sonic ‘left hand path’ often creates accessible music that only succeeds because the artist thinks it is blazing a trail. In the case of Tujarot one needs the full picture of their discography to see their open minds and Abruptum-esque totality. The best place to begin is the improvised ‘Cult ov Aether’ EP from 2014, a twenty minute tribal union as cosmic as it is cryptic. A similar geist appeared the next year with the composed fifteen minute track ‘Nolite timere tenebrarum amplexus amplectentur’ in 2015. This piece was raw black metal and again ambiance, in one and a half alternations, not far from old Ildjarn or Arckanum. I know, “When does the weird stuff happen?” that was it, really.

Instead of cluttering the avid listener’s mind with more ‘weird for the sake of weird’ black metal Tujarot have seemingly focused on blending their love of the textural aspects of black metal guitar riffs with their unique taste in dark ambient sound. This finds ‘Existencialista’ inhabiting a glorious space that incorporates ‘guitar forward’ metal sound that finds great personal contribution in it’s ambiance. What the hell am I talking about? This premise has no borders and you’ll find everything from Dawn-esque melodic black metal, atmospheric sludge crawls, and heavy metal stomping all within the first song (“Uranos”) alone. It is an album that offers a journey in three equal but separate parts.

In it’s original form this was literally the case. The original independent limited release of ‘Existencialista’ in June of 2017 consisted of 3 MCD’s arranged in a triangular case limited to 40 copies. With this more standardized release on 12″ vinyl the music is no less special or alluring and will thankfully reach far more people. Beyond concept and mixture of style the hallmarks of the best black metal are treated with great cohesion as jagged atonal movements and striking overarching melody lead each of the album’s three sections down different but similarly atmospheric avenues. The third track “Dryáda” was the most daunting with repeat listening as it has a five minute near silent ambient break in it’s center and though it returns in powerful form I would often skip right through the middle. The five minute hiatus offers very little consequence even at very high volume and became a small irritation as I became more and more familiar with the record’s overall flow and feeling.

Fans of atmospheric extreme metal may not find this adventure ‘pulls off’ it’s astral projection far enough and I suppose it won’t put a dent in the minds of folks who look for memorable riffs or singles with ‘hooks’. It is an odd dichotomy that is fairly common in metal sub-genre outsiders like Tujarot. What makes this release different is it’s use of accessible points that invoke everything from Ajattara and Runemagick to modern atmospheric black metal. Obscure but of some reasonable value is a nice sweet spot to be in and because ‘Existencialista’ falls there, I recommend it. 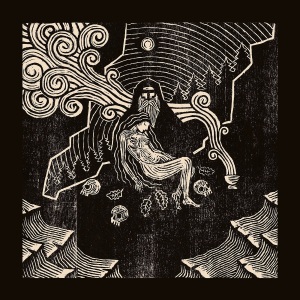