The Outer Gods represent dark forces in the impossibly far reaches of the solar system within H.P. Lovecraft‘s mythos and showcase a, partially assumed, duality between The Great Old Ones that almost entirely reside on the Earth. The author was likely vague about any dark/light implications to avoid too much speculation over the great, and sometimes very direct influence from the mythology of ancient Christian Gnosticism. Likewise Longueuil, Québec based technical death metal band Chthe’ilist construct similarly clever veneers upon their work as it builds an increasingly cosmic mythos upon that created by early Scandinavian extreme metal’s obsession with Lovecraft and the avant-garde.

The deepest belching Finnish darkness matched with an impeccably sharp fixation on the most classic 90’s underground progressives drives Chthe’ilist‘s mountainous vision of Demilich-ian crooked-necked tech-death/doom. Their debut full-length ‘Le Dernier Crépuscule’ appears as a jumping off point in 2016 and there is no better evidence for this than ‘Passage Into the Xexanotth’. Not only does the EP’s title track combine the springing, ghoulish extreme re-envisioning of ‘Nespithe’ you’re expecting, but it also delivers on some glorious Timeghoul and Thergothon references as it progresses. It is a seemingly impossible feat and perhaps sounds that way because they’ve sourced this song from songwriting sessions previous to their full-length. Interesting that an older composition and a cover song acts as the first time I’m truly impressed by this project, apart from their great taste.

The second track comes in the form of a cover track from the 1991 ‘Wrath From the Unknown’ demo by Crematory. Now, without shitting on the German band Crematory, who actually put out two decent-ish death metal records in the early 90’s, the good Crematory was a thrashing death metal band from Stockholm, Sweden. Their demos are the stuff of legends and despite a beautifully botched compilation in 2009 (since reissued in 2016) you’d almost need to be a demo-digging goon to know them. You’ll barely care about those old fuzzy Carnage demos once you hear ‘Denial’ and all that. Anyhow, Chthe’ilist interpret the opening track “Beneath the Crypts” with greater intensity and their own beguiling knack for croaking, twisted death metal. It is a brilliant treatment and nearly as exciting as the title track.

Xexanotth is the bane of the time god, the Great Old One Aforgomon, and can only be reached through defilement of an altar to his enemy with one’s own blood. I can only posit that Chthe’ilist performed such rites, or at least some very hard and careful work, in achieving their sound. This wild, otherworldly sound reaches back to a very obscure space in the past and rips forth some new and exciting darkness. I’m sure another full-length will be in the mix soon, but this EP is well worth the ten minutes it takes to absorb. 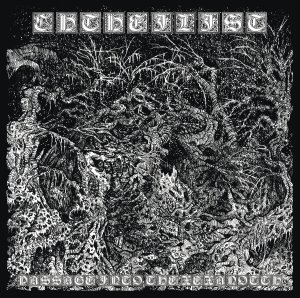