In his Dissertations sur les apparitions des anges, des démons et des esprits, et sur les revenants et vampires de Hongrie, de Bohême, de Moravie et de Silésie (1746) French Benedictine monk Antoine Augustin Calmet documented pagan beliefs surrounding spirit possession and demonic manifestation across several cultures. When he landed upon Egyptian beliefs of possession Calmet was uncharacteristically brief in detailing now typified ideas of haunting, that a wrongful death tethers the spirit to the defiled body rather than the location. Whether through incantations, or consumption of vital organs, ‘magicians’ could control or absorb the spirit, potentially invoking volatile power or the foresight of an oracle. In some sense Denver, Colorado based epic doom lords Khemmis‘ represent a sect of wizards commanding a great metallic vore able to absorb the spirit of influence without succumbing to possession.

Summoned in 2012 and creeping through the fog as a righteous mixture of Yob, Pallbearer and a hint of Matt Pike-isms on their stoner-adjacent self-titled 2013 demo Khemmis offered typical sound with unique style, a sound concept that hadn’t yet realized it’s ambition. I was swift in discovering and hailing the band’s full-length debut in 2015 as ‘Absolution’ was aimed higher and hotter than much of the doom of the year. Set beside Crypt Sermon, Magic Circle and Monolord it was decidedly modern and ambitious. The use of harsh vocals alternating with an impressive ‘pure’ epic heavy metal performance felt like a return to the resurrection of Manilla Road on ‘Atlantis Rising’ but with greater polish and a far sharper ear for the harsh moments. Though I wouldn’t say their follow-up ‘Hunted’ was surprising, it appeared aimed at portraying greater personae and offered beguiling experiment and familiarity alike.

‘Hunted’ set a tone for a band of explorers rather than iterators and though it wasn’t the ultimate refinement of ‘Absolution’ it told bigger stories with an increasing epic heavy metal vocabulary. So, embroiled in the hype for the coming of ‘Desolation’ I’d built an odd list with expectations of epic extended composition and death/doom flirtation etc. Pure nonsense in hindsight as this third full-length trims the fat, boosts the signal, and leans into more expressive performances. Khemmis have bravely focused on creating a resonant heavy metal classic, the type of record that can only result from self-editing in good taste and some level of astral projection-like revision. Wailing Mercyful Fate-esque solos and a good rub of Spirit Adrift‘s melodic-but-thrashing ethos on ‘Curse of Conception’ give the Denver quartet’s already epic doom flair a kick towards an ‘Ancient Dreams’ state of mind.

Phil Pendergast‘s emotive vocal delivery has always been confident but on ‘Desolation’ his performance brings a cleaner, more distinct tone to an already strong sense of melody. His range is impressive as his capability expounds the soulful modern gloom of Pallbearer as well as the chariot riding clip of Visigoth or Týr. Ben Hutcherson‘s growls have given way to brief blackened rasps that replace some of the death metal leaning moments on ‘Hunted’, and I loved the sinister multi-tracked parts of “Maw of Time” most. This tandem approach that defines Khemmis‘ sound between their two vocalists/guitarists achieves it’s best moments of narrative harmony yet on ‘Desolation’. Literal harmonization of vocal performance is in fact what elevates this latest Khemmis experience most. Their reach for greater variation, while still sourcing the musty charm of 80’s doom/heavy metal classics, reeks the satisfying stench of influence while maintaining their own sound.

The most immediate standout tracks “Bloodletting” and “Isolation” offer Candlemass / Memento Mori-esque epic and 80’s power metal fanfare one after the other as they kick into the most memorable and earnest performances of ‘Desolation’. Neither a moment of excess nor odd misstep bungle the flow of the tracklist, although if “The Seer” didn’t pop up when it did the pacing of ‘Desolation’ could have felt ‘samey’ in it’s middle-end. In fact “The Seer” is incredible both as a song and as a representation of how far Khemmis have reached in working towards increasingly professional sound and performance in the short span of just 5-6 years. I’ve never seen such a consensus suggesting a band is ‘ready for the big leagues’ and I largely agree the quality is there, but I don’t want to suggest ‘Desolation’ as a plateau but instead a great stretch of craftsmanship in an ever sharper-chiseled road forward. 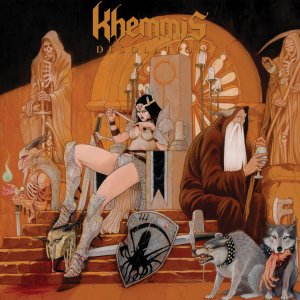