Resembling the rhythmic birth of garage-riffed, 80’s death metal history Ithaca, New York old school death metal band Mutilate set upon the world around them with a claw-hammer swinging philosophy guiding their way. You can smell the stench of decomposing victims bubbling up from the stacks of chained-shut freezers packed into their rehearsal space the moment their debut full-length ‘Tormentium’ begins. Dryly delivered rotten death metal riffs are simply banged out in every case with a growl smacking of the cold sociopathic confessions of a serial killer. Beyond the greater appeal of Mutilate‘s tuneful take on a classic style ‘Tormentium’ is uniquely unsettling in it’s menacing minimalism.

Inspired by the glowering doomed hell of Goatlord, Death Strike and early Acheron the bulk of Mutilate‘s songwriting takes influence from an era where musicians did more without the aesthetic extremity of performances to pad out their ideas. The most immediate comparisons that generally hold up across the bulk of ‘Tormentium’ are Master‘s 1985 demo and Speckmann‘s thrashed out work with Death Strike, Devastation‘s long lost 1987 tape ‘Dispensable Bloodshed’, and some of the songwriting feel of Morgue‘s ‘Eroded Thoughts’ on the side that featured Cianide‘s drummer. Across ten tracks I never got the feeling that Mutilate were even capable of filler material as they seem entirely intentional with their rhythms and riffs.

Depraved poetry of crimes against humanity, gore, pain and torture is delivered with a callous understated growl not too far from Devastation‘s rasp but with some of Paul Speckmann‘s ‘doubled’ effect use on his early demos. It isn’t all gore and death/thrash permutations though as the guitar work ventures from early death/doom towards riffs that could have fit on a Dream Death or Winter record. Perhaps because of the range of old school and orthodox influences paired with a sharp snare sound the drumming has a punkish early Autopsy-like feel to it that occasionally spins off-kilter. Because of it’s relatively straightforward delivery I think many death metal folks will have to mentally scramble a bit to connect with the ‘amateur’, mid-80’s demo aesthetics of ‘Tormentium’ at first. Memorable, rhythmic guitar work and the impressive variation on display absolutely supplant any complaints about Mutilate‘s low-frills approach.

Coming from a band that formed just last year Mutilate‘s ‘Tormentium’ is easily one of my favorite debuts of 2018 so far. Something just filthy, straight-forward and ragged enough to shake you out of your atmospheric fluff metal stupor. It’ll more than likely have greater appeal to death metal demo tape chasers and old school extreme metal fanatics should rush towards the value within. If you’re not bought into the menace displayed on the title track then I think “Life in Pain”, “Execution” and “Splattered Remains” should convince you one way or another and I’d recommend those songs for preview. 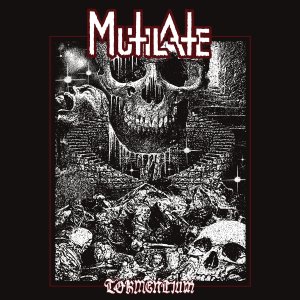 Leave a Reply to OPINION: The 50 Best Albums of 2018 & the year in review… Cancel reply