Conceived by guitarist/vocalist Colin Tarvin in his late teens with great influence from the crusted, slaughterhouse ways of Autopsy and Incantation, Mortuous‘ doomed death machine wouldn’t finish incubating into full-blown infection until the line-up stabilized in 2013. Once joined by ex-Exhumed vocalist/guitarist Mike Beams, Limbs bassist Clint Roach, and Necrot drummer Chad Gailey a greater professionalism bled through as Tarvin‘s songwriting evolved beyond the Murder Squad cheapness of their 2012 demo ‘Among the Lost’. For their debut full-length ‘Through Wilderness’ these old school death metal heads take an authentic stab at pre-‘Diabolical Conquest’ Incantation styled death metal and succeed by virtue of their inspired riffs and assistance from some greater masters of death.

With immaculate production and a mix to rival all other tasteful modern death metal sound Mortuous are clearly in good hands and leading with a strong stylistic conception. Somewhere between the Autopsy-fed senescence of Undergang (alternately Anatomia), the thrashing crawl of Accidental Suicide and the rot-gargling bellows of Disma exists a void that Mortuous fills exactingly. Surely more influences come out across the 40 minute length of ‘Through Wilderness’ as a love and close study of early 90’s death metal obscurities like ‘Expound and Exhort’ and classics like ‘Domination’ is apparent throughout. But the sound of the album will conjure obvious influences first and foremost. Much like Necrot, no matter how familiar with the influences of Mortuous you might be a constant stream of riffs and an inspired vocal performance carry the record with earnest enthusiasm.

A grip of guest appearances highlight the middle of the record with Chris Reifert and Danny Coralles of Autopsy providing vocals and soloing respectively on “The Dead Yet Dream” a song with lyrics by Matt Harvey (Gruesome, Exhumed). A great song in it’s own right it also features a main riff that reminds me more of “Where the Slime Live” than anything off ‘Mental Funeral’. Perhaps more worthy of mention here is the work of Greg Wilkinson who has given similarly polished and authentic production/mixing treatment to Necrot, Vastum, Acephalix and Abstracter more recently. Great sound and guest spots from some of their pals/idols aside, the lasting value of this record is ultimately going to boil down to your taste in the mid-paced, doomed spectrum of death metal that makes up the majority of this record.

Give me a good chugged-out doom riff and a watery guitar solo and I’m usually on board but I’m always reticent to hug up on a band that apes early 90’s Incantation thuggery without reason. In the case of Mortuous it is a stylistic influence integral to their sound that comes from the riff-writing process and not simply a studio-forced atmospheric resemblance for the sake of scene or sale. The riffs are what sell this thing for me and I enjoyed the progression from ‘Onward to Golgotha’ brutality towards ‘Mental Funeral’ insanity and the epic death/doom finale of “Screaming Headless” was a perfect touch. Will I remember most of it after a few weeks? Actually this time around I’ll say yes as there are a handful of tracks worth re-spinning; “Beyond Flesh” is a solid opener that is quite memorable but with further full listens I found “Crysalis of Sorrow” and “Prisoner Unto Past” were huge highlights for me. With still plenty of room to improve, and find more of their own distinctive traits, ‘Through Wilderness’ is an admirable debut well worth hearing. 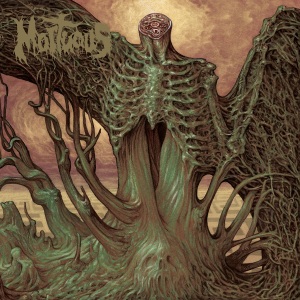