Before you even think about listening to Horus‘ (James Brown III) latest Vorpal Sword album steel yourself with the fair warning that it’ll blow every speaker it touches with cursed bursts of noise shrouding schmaltzy-but-true blackened shoegaze. An under-noticed phenom diligently at work for the last several years Horus quietly cranks out records under various projects under the Rising Beast label. Vorpal Sword distinctly uses a clangorous, throat clenching blast of wailing feedback in place of traditional guitar tone. Though the project started fiercely clouded by power electronics-esque horror on ‘10,000 Stab Wounds’ in 2015, Horus has become more adept at balancing studio effects, blackened punk and shoegaze with each release.

‘Inflictor’ was my personal introduction to Vorpal Sword in 2016 and I was pretty offended it’d even been recommended to me at first. What I heard at the time was a buzzing punk version of what Gnaw Their Tongues had been experimenting with around that time but with a closer listen Horus‘ choices are clearly more driven by a love for sappy and melodic rock music and it’s application to harsh extreme noise. Going far beyond the wandering, tuneless adultery that is blackgaze Vorpal Sword is heinous aggravation your ears will quickly normalize as they would a screaming hardcore band or an early 90’s basement black metal demo. When this clicked for me I found ‘Inflictor’ to be an enthralling punch of new noise to a raw, wimpy set of eardrums.

At that point Horus began focusing on Moonknight, his more traditionally executed atmospheric black metal project, and Vorpal Sword didn’t reappear for a couple years until this May with ‘Deformer’. This latest stab at noise-driven, blackened shoegaze is immediately more accessible underneath the blasts of distorted noise driving most of the songs. The heavy coat of ugly screams and ringing chords that drapes otherwise quite pretty rock music is almost artificial in sound; As if he’d stripped a backing track from a Beach House or Slowdive album and roughed it up with a guitar connected to a hundred distortion pedals and some howling black metal vocals.

In terms of Vorpal Sword‘s entirety this album has one of the stronger first halves to date. Rock-oriented composition and additional layers of unobstructed guitar work create a buzzing curiosity throughout from the Mohican crawl of “Secrecy” and “Tip of the Spear” to the early 90’s dream pop verve of “Blue Adept”. Where I start to shake it off is the re-appropriated alt-rock sounds of “Door Into Summer” that sound a bit too much like a scraped up and failing Catherine Wheel tape. Sometimes the noise aspect of the music works and it occasionally clashes in an awkward way. I appreciate the experimental nature of the project and the earnest and highly listenable rock influences inherited through mutations of punk and blackgaze ideas. If you are convinced enough to try it, maybe turn down your headphones a bit first to avoid breaking anything. 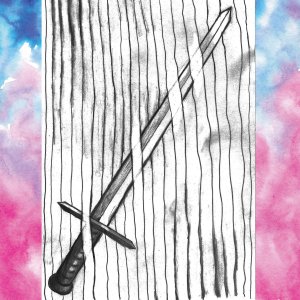