On their debut ‘Vittra’ Skogen was a slower-paced, Drudkh-like experience that became somewhat more personalized and folk-metallic on ‘Svitjod’ in 2011 as the drummer from Devilry joined the fold. For my taste ‘Svitjod’ is a near perfect atmospheric black metal album that arrives, and lifts, like a low-hanging coastal fog before a late-Spring afternoon. It is a definite highlight in Skogen‘s discography that reminds me a bit of early Horn and Drudkh but far slower and almost ‘new age’ in feeling. From there I largely lost interest in the polished, typical sounds of ‘Eld’ and ‘I Döden’ as they moved towards something closer to Wodensthrone, and post-‘Microcosmos’ Drudkh that felt insincere or at least rote to my ears. The four years between releases was just enough time to reset, rethink and Skogen is righteously revived on ‘Skuggorna kallar’.

The addition of Jonathan Jansson (Pantokrator, Crimson Moonlight) on guitars prior to the composition of ‘Skuggorna kallar’ appears to have been a valuable acquisition in terms rising to the sheer ambition of the album. Still as aggressive as they were on ‘Eld’ Skogen have incorporated ‘clean’ vocals, melodic death/doom, and folk metal elements into their sound en masse compared to previous. The album starts to build a somber intensity around “Frostland” and carves out a few longer ‘epic doom metal’-esque songs as it concludes. The provocative guitar solos and growling vocals of “Suns Blood” does some amount of work preparing the listener for “Beneath the Trees”, a grand Primordial-esque blackened epic with an admirable doom metal vocal in it’s second half. Though I wasn’t immediately sold on the album from the start, as it ended I was dumbfounded by it’s powerful conclusion.

Skogen piles offerings upon a great tumulus as the album concludes; “The Funeral” is an end that begins with a death/doom metal passage mournfully melting towards a piano-lead fugue before another heavy refrain. This is a fantastic and unexpected development for the band’s sound and entirely unique considering they’re evolving from a decidedly folkish atmospheric black metal place. I would hesitate to call ‘Skuggorna kallar’ progressive but perhaps only because of their previous reputation. It might be most fitting descriptor for the organically expressed ambition of this fifth full-length. I would especially recommend this album to fans of Woods of Ypres for it’s gloom and heartfelt delivery, or anyone who felt like Fen lost some of their woodsy appeal after ‘The Malediction Fields’. The duo of “Beneath the Trees” and “The Funeral” is a hex upon my mind and an affirming 17 minutes for any fan of earthen black metal variation. I would suggest previewing those tracks first and personally consider them reason enough to buy the whole thing. 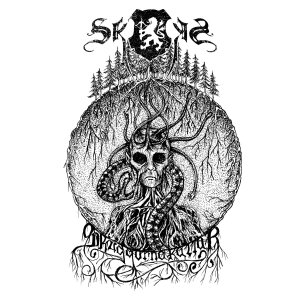