This split tape between New York based Ordeals and the intermittently active solo project from current Merrimack bassist Daethorn is an oddity and a treat to snag. Each band offer a similarly old school flair with their approach to occult black metal devastation. Side one is ten minutes of a new face for Ordeals, who leaned towards a mix of blackened death metal and death/doom on their 2016 ‘Apotheosis’ EP. Their semi-melodic approach begins with guitar work that must’ve been heavily influenced by Necrophobic‘s second album ‘Darkside’ but they haven’t lost their guttural Finnish death metal style vocal affect. I love the melodic black/death feeling of “Night of the Ghoul” and would be excited if they were starting to lean towards a sort of Epoch of Unlight or early Abominant style melodic black/death band.

For their second song Ordeals actually covers Daethorn‘s last track from a 2002 split with Wakboth “Deadly Slumber”; I connected with the old school thrash build in this song and it served as my introduction to Daethorn‘s compositions, as I’d never heard his material previous. It’d be fair to call “Deadly Slumber” a blackened thrash metal song. A good show from Ordeals and something almost completely unexpected if you’d only heard ‘Apotheosis’ before. Daethorn is a more traditional, flow-obsessed orthodox black metal artist with some greater influence gathered from the French occult black metal scene since. With sixteen years since his last release as Daethorn this could appropriately serve as a reintroduction for his music, which is completely focused on the savagery of early 90’s black metal guitar attack; Early Glorior Belli and Blaze of Perdition would be decent comparisons but his style is generally more frantic and angular.

Endlessly thrilled by obscurities and promising underground projects, I enjoyed a brief twenty minute window into the current state of both Ordeals and Daethorn. I particularly like this almost 00’s era Deceased meets meloblack approach Ordeals is sorting out. Would recommend this to fans of mid 90’s black metal and that odd pre-’92 demo era where Swedish bands scrambled from death metal trends towards black metal. 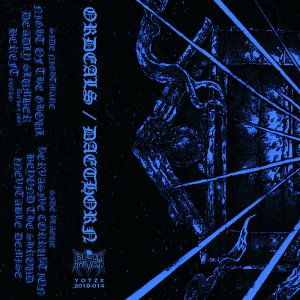