Primarily active in some form between 1991 and 2006 Eagan, Minnesota born death metallers Ossuary Insane were a heaving, semi-guttural outlier in the quality-over-quantity Midwest United States death metal scene from the start. Their sound was a mix of Grave‘s raw and chugging hell-cauldron, the menacing delivery of early Deicide and an old school brutal death metal drum performance that never pushed the extremity towards the ridiculous. This compilation collects their 1995 demo as Ossuary ‘Fallen to the Pits’ and their 2006 promo demo ‘Bottom Feeder’. ‘Decimation of the Flesh’ essentially completes the reissues of Ossuary Insane‘s discography with the original line-up and features some of their strongest material outside of their 1998 full-length ‘Demonize the Flesh’.

The trio really hadn’t wildly changed their approach in the decade between releases but I will say the ‘Bottom Feeder’ demo was really onto something unique with “Truth Be Told”. Maybe I’m just a sucker for chanting and surreal melody in extreme metal but I found myself fixated on that track for whatever reason. The rest of ‘Bottom Feeder’ is down-tuned caveman death with plenty of great Cauldron Black Ram-esque riffs cruising under the weight of the guitar tone. I don’t think Ossuary Insane ever delivered a well mixed or professional recording so a lot of the charm is the relative demo quality and off-kilter performances of each of their releases.

‘Fallen to the Pits’ is a raw beast but still clean and professional by 1995 demo tape standards. I believe this is the ‘remix’ version from the later issues of their first album, but either way the music is well preserved here. Ossuary hits hard right out of the gate with “From Beneath the Blood” a tune I’d consider one of their best if not for some of the strange vocal effects applied. The other two tracks from the demo were given superior revision on the band’s full-length a few years later. I’m somewhat surprised this compilation doesn’t include their ‘Demonized’ demo from 1997 but I understand how that’d be slightly redundant when a full discography compilation is released.

Though this band never really fit in anywhere they left behind a couple hours of brutally aggressive and noisome amateur death metal. This particular release is definitely more for collectors and Midwest death metal fanatics but I think it will pique some interest in their 1998 album ‘Demonize the Flesh’ especially for folks who like that finite space inhabited by old school brutal death metal before hardcore/metalcore culture took over. Highly recommended for fans of rotten, frightening death metal stuff like Doom Formation, Miscreation, and Judecca. 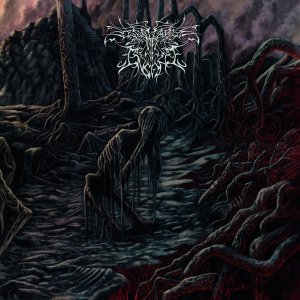