Likely inspired by his stint drumming for Deströyer 666 on their ‘Phoenix Rising’ full-length, Nuclear Exterminator (Jarro Raphael) set out along with bassist Regan Destruktor (Destruktor) in forming Nocturnal Graves. His vision for the band’s first decade was an approximated Melbourne-style marriage of first wave black metal tone and mid-80’s thrash metal riffing. Raphael‘s approach to thrash riffing immediately stood out because he didn’t rely as heavily on German thrash metal for inspiration as many of his compatriots. The culmination of those efforts was the late 2007 release of ‘Satan’s Cross’, a sinister blackened thrash metal album that pulled influences from death/thrash classics as much as it did 80’s black metal. Ranting, merciless waves of thrash garnered deserved attention yet, for whatever reason, the duo would dissolve in 2010.

From there Raphael went solo with Impious Baptism and within three years he’d basically written two Nocturnal Graves albums. Impious Baptism‘s ‘Wrath of the Apex Predator’ was most certainly more of a death/black record but has some undeniable relevance to future releases from Nocturnal Graves, especially their approach on ‘Titan’, a heavier and mid-paced album. Just as impressive was ‘…From the Bloodline of Cain’ a full-length that saw the return of the project with longtime/former Deströyer 666 guitarist Shrapnel (Ian Gray) joining. This re-ignition of the project also included Decaylust (Guitars) and L. Wilson (Drums) of underrated black/death band Denouncement Pyre. This was a more serious and adept line-up that took the black/thrash of ‘Satan’s Cross’ and amplified it’s attack with wailing guitar solos and forceful black/death metal drumming.

I have a fondness for ‘…From The Bloodline of Cain’ that comes from discovering the album in 2014 during the long wait for a follow up to that first Mongrel’s Cross album that likewise mixed elements of black, death, and thrash metal although in different ways. After whipping out a Coffin Lust album and working with a handful of other bands in studio Raphael took greater reigns on ‘Titan’, Nocturnal Graves‘ third full-length and debut for the Season of Mist imprint Underground Activists. Performing most all of the instruments outside of some vocals and lead guitars the most distinct change is Raphael‘s blackened death metal drumming that appears as an extension of his work on ‘Wrath of the Apex Predator’ but with a greater lean towards old school death metal. I consider it the ‘South of Heaven’ of the project’s discography so far, and I mean that as a big compliment.

It’d be reductive to suggest that slowing down classic black and thrash metal riffs and down-tuning a bit would always resemble death metal; If only because the ‘death metal’ tag has grown so amorphous over the last three decades. It does however appear that mid-paced sections and brilliant production value have provided some greater redeeming change for Nocturnal Graves. Still insolubly blackened thrash metal in style ‘Titan’ is a successful atmospheric paradigm shift that growls and swells from every corner. The driven, classic thrashing guitar work now influence and not spectacle while menacing black and death metal riffs cloud amid surges of orthodoxy. Decaylust and Shrapnel‘s leads range from peak Hanneman-esque flailing to wandering Azagthoth-ian trills and add many distinct moments to an otherwise very driven death metal record.

The sound of ‘Titan’ calls to mind Embrace of Thorns‘ moody black/death crawl, the blasting death/thrash of early Headhunter D.C., some of the chunkier parts of ‘Blessed are the Sick’, and a less melodramatic/epic Disharmony. No comparison really worked out for me a hundred percent outside of Impious Baptism with some hints of more recent Incantation (‘Dirges of Elysium’) and ‘Titan’ generally holds up on it’s own merits with rhythmically satisfying guitar work, impressive sub-genre merging, and plenty of riffs. The stylistic change from true black/thrash metal to the atmo-death/blackened thrash of ‘Titan’ has been gradual enough to make sense and still sound like Nocturnal Graves but it is a leap in design compared to the shift between the first and second album. This could be off-putting for the black/thrash crowd who aren’t necessarily keen on some of the death/doom movements of the mid-90’s but I find this new approach just as appealing.

After roughly fifteen full listens across the span of two weeks, and some regular listening since, I’ve found ‘Titan’ snuck up on me as one of my most listened to albums so far this year. It is arranged in such a way that it holds up well on repeat as background music or a session of focused listening. Zero gripes with it’s production sound, composition, or really even style. My favorite riffs came in the form of “Ecdysis, Shedding Weak Flesh” and the thrashing hysteria of “And Hell Followed Them” but I’d just as well recommend any song from ‘Titan’. Quality stuff throughout and an impressive evolution of Nocturnal Graves‘ sound. 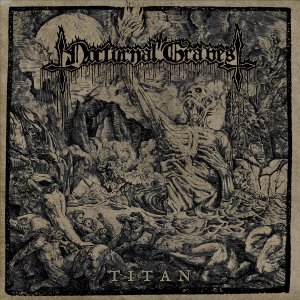