Long one of Israel’s most consistent death metal acts Arallu‘s fourth full-length spins a blistering yarn of Mesopotamian destroyers into the endless chaos of terror and oppression roiling present day Sumeria. ‘Desert Battles’ stylistically built twofold upon the concepts and stylistic approach of the previous album ‘The Demon From the Ancient World’ but traded some of it’s thrashing black metal intensity for influences from Israeli folk instrumentation and melody. The long sold out album represents a strong period of growth for the project and by remastering it’s sound and re-recording the vocals they’ve given reason enough to revisit Arallu‘s past.

Many positive changes have been made in this remaster with the most obvious one being the new mix/master by Dory Bar (Eternal Gray) who was responsible for the sound of ‘Six’ and ‘Geniewar’ before this. The track list has been entirely re-arranged to great effect, the flow of the record is hugely improved, and they’ve included a handful of unreleased tracks as well as the 2009 ‘Magen Jerusalem’ EP. I can’t speak the quality of the bonus tracks, I don’t think they’ve been remastered outside of the previous unreleased “Desert Genii Storm”. The vocals have been re-recorded with Moti ‘Butchered’ Daniel‘s performance more forceful like on ‘Six’ and this makes the tone of ‘Desert Battles’ darker and more serious than before. The somewhat flat, blackened deadpan thrash sound of the original ‘Desert Battles’ is replaced by a thicker, deathly mix that works quite well.

What makes ‘Desert Battles’ stand out is Arallu‘s incorporation of  Israeli/Arabic folk music elements with a death/black/thrash style commonly associated with similar bands like Melechesh, Absu, and Rudra. This experimentation is probably best incorporated as they progressed towards ‘Six’ but ‘Desert Battles’ does a great job of making that traditional instrumentation prominent without losing the attack of blackened thrash influenced death metal. It was nice to revisit this record after several years and hear all of the respectful improvements made to the original. Though I love the original sound of Arallu‘s discography in general, increased clarity does a great justice to the ambitious style of ‘Desert Battles’ without losing any of it’s impact. A great place to start in the band’s discography and I’d highly recommend their most recent album ‘Six’ as well. 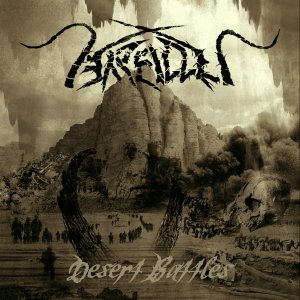