If you need a paragraph to qualify art before you analyze it there is already a good case against it’s worth to the layman. But we are all here for death metal and the layman is not at all relevant to the monumental, culturally important evolution of extreme metal by way of it’s (arguably) most potently accessible permutation. Death metal itself was born from many of the same influential releases in the early 80’s that would influence thrash metal and black metal. Attitude had as much, or more, to do with metal’s evolving performative art as the guitar tone or style of riff did. Possessed nailed the attitude first and foremost delivering an extreme form of thrash metal with fiery technical execution and fittingly extreme themes. ‘Seven Churches’ is as synonymous with early death metal whereas Death themselves have become a heralded legacy with influence spanning multiple variations of death metal over the last thirty years. Pointedly paying tribute to Death and no others Gruesome offer a tough case to analyze by explicitly resembling a legacy, on purpose.

After some involvement with the Death To All tour in 2012-2013 Matt Harvey (Dekapitator, Exhumed, Pounder) and Gus Rios (Divine Empire, Sickness) were inspired to keep playing that classic style of Death-metal without having to pay licensing fees for every performance. The way I see it Gruesome received quick notoriety by smartly aiming for the larger Death fanbase as they hopped over 30 demos (between Mantas and Death) as well as the style of ‘Scream Bloody Gore’ and jumped straight into the ‘Leprosy’ inspired ‘Savage Lands’ in 2015. All of the buzz around Gruesome generally amounts to fans of Death being bored with bands that sound like Death and calling Gruesome imitators despite that being the express intention of the project. It is on the record supposed to sound like Death. Put down your Capri Sun, pull up your Devourment logo gym shorts and chill out.

But hey, does it really sound like Death? No matter how much the remasters of ‘Leprosy’ and ‘Spiritual Healing’ polish their sound they are were always slightly ‘cheap’/DIY and artificial in sound compared to their Floridian brethren who’d pop up nearby. This is exactly the charm of those early Death albums between the distinct clangorous reverb of the drums on ‘Leprosy’ to the hammer horror villain Tardy-esque sound of Schuldiner‘s voice on “Living Monstrosity”. Gruesome doesn’t emulate those details so much as they approximate them for a modern audience and does nothing to intentionally obscure or retro stylize their sound. Style is emulated indirectly and doesn’t pay close attention to picking technique, guitar effects, or drum fills. The tribute is given life through approximation and general feeling, not painstaking recreation. In this sense Gruesome surely resembles a blurry image of Death, a nostalgic approximation fans might see exactly fitting if they’ve not revisited the early discography in several years. This is exactly the intention, to preserve and celebrate the style without being a cheap cover band.

Where Gruesome excels most is in aesthetics and sound. From stunning Ed Repka cover art to nailing the grisly poetry from Schuldiner‘s early days their first four releases have a beautiful look and professional package. ‘Savage Land’ resonated with me immediately because ‘Leprosy’ is a top five all time favorite that has stuck with me for years. ‘Dimensions of Horror’ was an exciting EP because I’m also a well documented Possessed fanatic and it seemed like it could be a new direction for the band, I mean one of Possessed‘s more recent guitarists plays in Gruesome as well. From there all was a ball-busting blur of a tease as they recruited session drums from Sean Reinert for the ‘Human’ inspired ‘Fragments of Psyche’ EP in 2017. But instead of jumping right into ‘Human’ territory ‘Twisted Prayers’ closer represents the early technical/progressive death metal ideas Schuldiner explored on ‘Spiritual Healing’.

Death‘s third full-length was undoubtedly transitional and seeing as how Schuldiner restaffed the band quickly afterwards he likely knew it wasn’t fully there. ‘Twisted Prayers’ doesn’t go ape trying to closely resemble it beyond the use of meandering guitar phrasing and a lot of riffs that are obviously inspired. I really appreciated the energy and inspiration behind ‘Savage Land’ because the composition of the album was nostalgic without feeling like some kind of flat, iterative nonsense from a young band learning how to play. ‘Twisted Prayers’ plays like a medley of ideas from that ’90-’91 era of Death while offering no great memorable gifts of their own along the way. ‘Spiritual Healing’ offers a grand midpoint for Death with it’s dance between their brutal thrash influenced death metal and progressive metal ambitions and the ‘spirit’ of that release is not captured effectively by Gruesome. Alas that could be my meaningless expectations, from interviews and marketing, fighting with their intentions.

From the underground and below several death metal bands took this same influence and created superior products because they weren’t limited by tribute band status. From Disincarnate, Pestilence, and Gorguts to underground legends like Chemical Breath, Disciples of Power and Strangulation, ‘Spiritual Healing’ had certain influence upon several major and minor technical death metal releases and you could hear those elements echoed into the future on formative recordings from modern groups like Gory Blister and Anata as well. Of course I run the risk of ‘missing the point’ of the tribute aspect of Gruesome, but I also think ‘Twisted Prayers’ is too literally derived this time around. If this all comes across like the ramblings of a picky snob, sure, consider it a tribute to the finicky, forward-thinking legacy of Chuck Schuldiner.

If it wasn’t clear by now, no matter how many times I spin this record I’m on the fence about it. I greatly respect the legacy of Death and love that such a high quality reproduction exists to keep the style and influence of the music going, I just wish they’d been more inspired by ‘Spiritual Healing’ when writing it. This is also a really solid covers band and hearing their covers of old demo-era Death, Possessed, and Slayer songs at the end of every release is admittedly half the fun. I own the originals, though, and they all still hold up really well (remastered or otherwise). I will say I got a kick out of the cover of “Legion of Doom” which goes back to the very first Mantas rehearsal/demo tape and the beefed up sound came across like the second Hallow’s Eve record a la “Lethal Tendencies”.

As intended, this is a strong tribute to Death‘s evolution beyond thrashing gory death metal towards socio-politically conscious progressive death metal. It is meant to recreate an approximate, era-specific Death release and in this sense it is successful. Where I fall off personally is in the songwriting itself, which falls slightly flat compared to both the original inspirations and ‘Savage Lands’. I’m personally conflicted on the value of the listening experience long-term, but I have no doubt casual listening and nostalgia will find this incredibly evocative and listenable. “Fatal Illusions”, “A Waste of Life”, and the title track were my personal favorites and you’ll see each has a relevant doppelganger on ‘Spiritual Healing’. Though I couldn’t really meet Gruesome on their own terms due to nostalgia for the source material, I still enjoyed the record from start to finish. 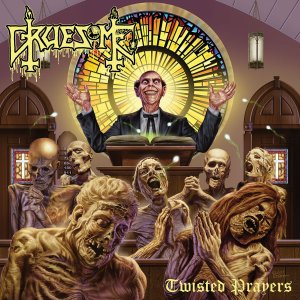